Veeam hits a long-sought milestone as they looks to drive their hybrid cloud strategy with a new strategic partnering initiative. 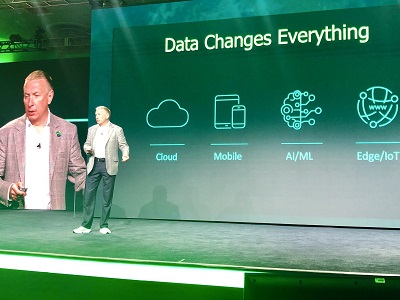 MIAMI – Today, at the fifth VeeamON customer event here, availability vendor Veeam announced they have reached the projection they made six years ago, reaching a billion dollars in revenue on a trailing 12-month basis. They also announced a new strategic program, based on the principles in the recent extension of their alliance with Nutanix, designed to strengthen their drive into the hybrid cloud market.

“Ten years ago, virtualization was the trigger for data centre modernization, and  Veeam was very lucky to be there at the right time and right place and we rode that wave of virtualization backup, and then we spread from there to the whole data centre,” said Ratmir Timashev, Veeam’s Co-Founder and EVP Sales & Marketing. “As of today, we are very proud to announce we have achieved one billion in revenue bookings on a trailing 12-month basis. We projected that we would do this in 2013, back when we had $150 million in revenue.”

Timashev noted that only 34 software companies have hit that goal.

“We also achieved another huge milestone, of 350,000 customers, and are adding 4,000 every month,” he added. “The most common reason for this is word of mouth – the recommendation of colleagues.

“That was Act One,” he noted. “But successful technology companies have an Act Two.”

“Data protection in the hybrid cloud is the biggest opportunity for the next decade. This is the next stage of our evolution. Our vision is to be the most trusted provider of backup solution that deliver cloud data management. It’s no longer about just backing things up at night.”

Partnerships will be critical to fully develop Veeam’s strategy. Veeam recently announced a new partnership and technical integration with Nutanix around the forthcoming Nutanix Mine secondary storage initiative. It’s based on a conception of a very broad ecosystem – with Veeam at its centre – linked by deep relationships.

“This is a very exciting new product that will be coming later this year,” Timashev said. “The goal is to provide absolutely seamless out-of-the-box customer experience – two customers, one single solution – and easy to procure through our joint channel customers.

“It’s time to bring this experience to the next level,” Timashev stated. “The same way we work with Nutanix, we want to work with our other partners as well.”

“When we look at the world we see two sides – storage and data management,” Timashev added. “Tens of billions of dollars have been invested, but the best solutions come when two innovation areas come together. We partnered with vendors and introduced universal storage APIs. We have announced solutions with Nutanix and Exagrid, with the same goal, to develop these APIs for our partners. That’s our vision.”

Accordingly, Timashev announced the new “with Veeam” program, which is designed to develop its integrations with strategic technology alliance partners to a much tighter level. It will provide broader and deeper integration points for partners to be able to deliver a secondary storage solution as a unified full-stack quickly and easily.

“We believe many of our existing partners will join,” Timashev said. “Our goal is to build a very broad ecosystem of secondary storage systems with our partners”