We’ve all spent the last year or more talking about two of the biggest trends in the industry – the consumerization of IT and the “bring your own device” movement.

But just how widespread are these trends in actuality?

According to technology consultancy and solution provider Avanade, pretty darned widespread. The company’s worldwide study of “more than 600” senior business and IT leaders across 17 countries (including Canada) shows the vast majority of businesses are already there.

Specifically, 88 per cent of executives polled (87 per cent in Canada) says their employees are using their own personal computing devices for work every day.

The Avanade report paints this move as “an unstoppable shift” that not so much is about to happen, as has already happened.

Some more findings from the study:

So what’s the attraction, then? Same thing it always is – productivity and doing more with less. According to the study, 58 per cent globally (and a whopping 71 per cent in Canada) said the best outcome for their business is  the ability of employees to work from anywhere. Coming in second: almost half – 49 per cent in Canada, 42 per cent globally – cited the fact that their employees are more willing to extend their workdays as a major driver.

Other notes from the study:

The below infographic (courtesy Avanade) looks at what the company describes as the six myths around the consumerization of IT. 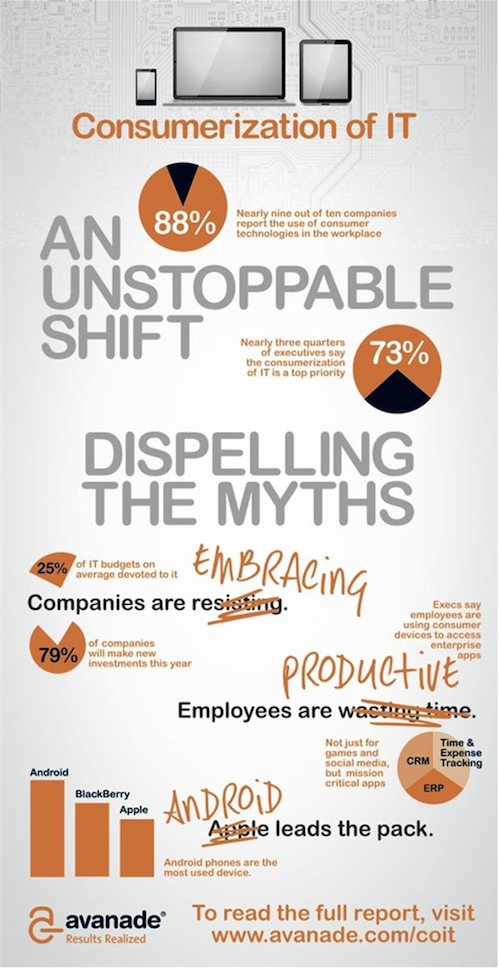