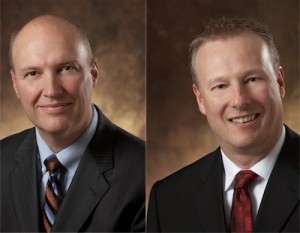 Ingram has added data capture/point of sale vendor Intermec to its linecard, and expanded its distribution deal with Avaya, giving Ingram Canada boss Mark Snider and sale chief Dave Mason cause for celebration at the recent VentureTech Network Invitational in San Francisco. (Disclosure: ChannelBuzz.ca attended the 2010 Fall VentureTech Network Invitational in San Francisco as a guest of Ingram Micro Canada.)

Here’s a look at the thinking behind Ingram Micro Canada’s two latest vendor partners, as well some insights on a variety of other hot-button topics in the channel.

The Intermec partnership is a big deal for the distributor, Mason said, because of the size and scale of the vendor in its particular arena. It’s instant credibility in the DC/POS space for the distie.

“Intermec specifically puts us right into the tier-one category of DC/POS distributors,” he said. “Partners can come to Ingram and get the products they need across that space, and that’s big for us.”

Snider reported that while there’s opportunity for DC/POS to spread across the channel – particularly with ideas like linkages to RFID and digital signage driving new opportunities – thus far the DC/POS channel remains a pretty small and specialized community. “It’s a smaller part of the business than we’d have liked,” Mason admitted.

The Avaya side is an expansion of an existing distribution deal that will give Ingram Canada access to the company’s full array of solutions, including the recently announced video lineup. Previously, the distributor had worked with Avaya on the legacy Nortel data side of the business, a relatively small part of the overall picture, and in Mason’s estimation, rounds out the distributor’s voice story. “[Unified communications] is still a big play in the marketplace for us,” he said. “They’ve got the technology, the acquisition is behind them, and we’re very excited by what they can do in 2011.

(Expect much more on Avaya’s plans for next year here on ChannelBuzz.ca next week, as we’ll be on-site at the company’s Americas Partner Conference in Las Vegas October 19 and 20.)

Snider said that Ingram Micro Canada is hiring three customer-facing technical specialists to support the expanded Avaya business and to provide assistance and education to current and prospective Avaya partners. “Avaya requires a higher level of technical expertise,” he said. “Our goal is to educate resellers on how to sell as well as how to implement.”

As is often the case when ChannelBuzz.ca sits down with channel leaders to discuss… well… anything, the conversation with Messrs. Snider and Mason was hardly neatly confined to the topics of Intermec and Avaya. Here are some other notes from our chat: