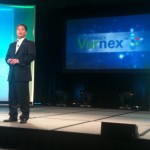 Speaking to a room of 250-plus Varnex member partners (including for the first time 16 Canadian partners), Murai told partners that they need to partner intelligently and carefully; focus on opportunities and follow the money; and leverage partnerships and community to find success.

“In the IT market, we’re seeing growth, in particular in the U.S., and now starting to come back in Canada,“ Muraid said, adding that the technology industry is growing at well above the two per cent growth in gross domestic product seen in the U.S.

Partner intelligently – Murai urged solution providers to choose carefully, to work with a distributor “that’s innovative, that understands where the market is heading, and that’s making the right investments.”

Murai’s supporting evidence for SYNNEX? The company was relatively flat in 2009 vs. 2008, when the market in general was down 15 per cent, and saw growth in a number of businesses it invested in. And now with growth returning in 2010, the executive reported that his company’s “growth is now a very comfortable gap over what the market is for the year so far.”

Focus and follow the money – “You can’t be everything to everybody,” Murai counseled attendees, sharing top priorities for the company that include virtualization, green IT, management, cloud, mobility and convergence. On the cloud front, Murai said SYNNEX has been focused on the “as-a-Service” (or XaaS) piece, and particularly in building out offerings that help small businesses bring enterprise-class applications in on a more consumable level.

Leverage partners and community – Murai’s third step goes directly to the core value proposition of the Varnex community, the ability to appear and act as a much bigger entity by working together to meet customers’ needs whether those partnerships are based on geographic coverage, vertical focus or technical expertise.

In an odd way, the fact that it’s a jobless recovery bodes well for SYNNEX and its partners, Murai said, because the focus remains on cost control and other areas where IT is seen as a key enabler. “[Customers are] going to invest in areas they can improve their cost structure, their productivity and their overall service, and a lot of that improvement comes from investment in technology,” he told attendees.

Murai also demonstrated the distributor’s new mobile applications, including its ECExpress e-commerce frontend for a variety of smartphone platforms, which offers the same functionality as its browser-based environment. The company also offers other SYNNEX-centric apps, including a show guide for the event here.

“Mobility goes beyond selling more netbooks, notebooks, tablet devices and smartphones,” Murai said, adding that mobility represents both an opportunity and a risk for the channel.