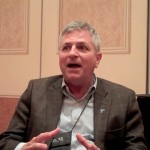 Sixteen inaugural members were on hand for the kickoff of the Varnex conference here, along with eight Varnex Canada sponsors.

ChannelBuzz.ca sat down with Bob Stegner, senior vice president of marketing for North America at SYNNEX and one of the architects of the Varnex program, to discuss the group’s expansion to Canada. This is the second time Stegner has played an important role in a distribution reseller community coming to Canada. He previously was heavily involved in the Canadian launch of VentureTech Network in Canada in a previous life.

ChannelBuzz.ca’s full coverage of Varnex Fall Conference 2010 continues tomorrow, with commentary from many of the Canadian partners and vendors on hand in Las Vegas for the event.