The JetStream technology, which leverages the VMware IO Filter API, has its roots in a company called FlashSoft, which was acquired by SanDisk, was part of the WD acquisition of SanDisk, and has now been spun out into a focused software company. 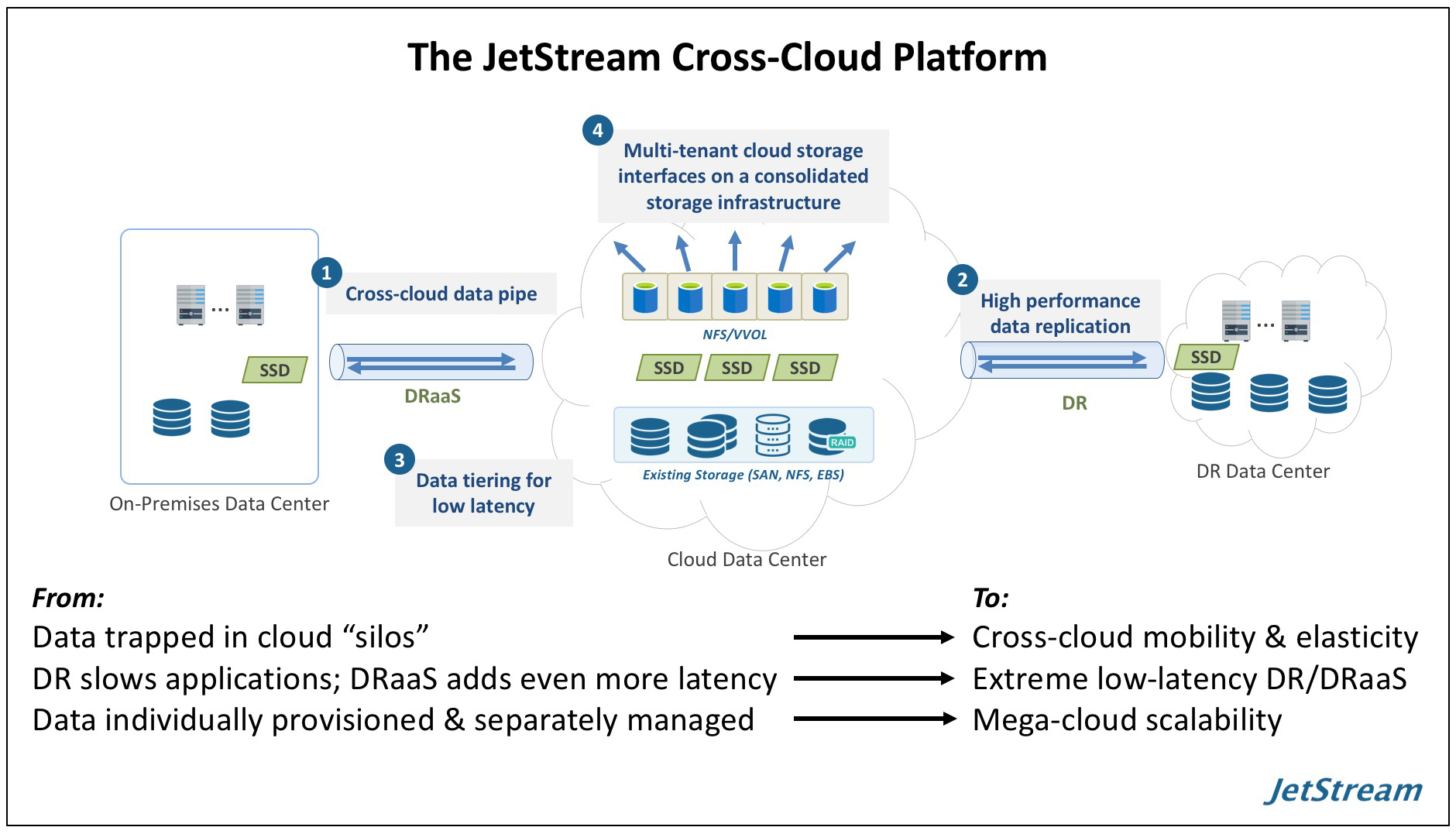 Today, JetStream Software launches with a next-generation cross-cloud data management platform designed to give VMware cloud service providers [CSPs] and MSPs the kind of cross-cloud data management capabilities that have been limited to the hyperscale companies until now. The JetStream Cross-Cloud Platform leverages VMware IO Filters – which they helped to develop –  to provide advanced workload migration, resource elasticity, and business continuity across multi-cloud and multi-data center infrastructures.

“We are launching the company specifically for CSPs and MSPs,” said Rich Petersen, cofounder and president of JetStream Software. “It has two components. JetStream Accelerate, which is available now, optimizes performance. JetStream Migrate, which offers VMware-optimized live migration, will be available in Q2.”

The technology originated with a company called FlashSoft, which made Flash virtualization software to increase application performance and virtualization capability, and which was acquired by SanDisk in 2012, to provide SSD-optimized software as part of a push SanDisk was making into the enterprise market. As part of SanDisk, they were selected as a design partner for the VMware IO Filter AP in 2014.

“We had a very solid relationship with VMware from 2014-15 around their storage API framework,” Petersen said. “We were part of the collaboration in developing the IO Filter integrations.”  In 2015 this led to FlashSoft 4.3 for VMware vSphere 6, the first software certified as VAIO VMware Ready. It now has over 1,000 enterprise deployments.

In 2016, WD acquired SanDisk, which ultimately led to the spin-off that is being announced today.

“We were very software-centric, and SanDisk, and then WD after they acquired SanDisk in 2016, were more hardware-centric,” Petersen stated. “We wanted to keep the partnership going with VMware. So over the course of 2017 we negotiated with WD how we would maintain the IP we developed and how we would assist WD customers as a separate company. WD has an ownership stake in JetStream, but it’s not a major one.”

JetStream’s value proposition is addressing the problems CSPs and MSPs have with data management in the cloud.

“The challenge for a lot of CSPs and MSPs is that while they have access to traditional tools for data management, those were designed for a single organization and its data,” Petersen said. “So CSPs apply them in siloes on a per-customer basis. That creates a friction point. “Our approach was to do these data management capabilities on a platform that would support multi-tenancy and scalability. Other people are working on these challenges, when they have resources at their disposal. The hyperscalers have dealt with this. But the thousands of MSPs who use off the shelf solutions like VMware don’t yet have a a comparable offering for data management. We provide this through standard APIs, including the IO Filters which we helped to develop.”

JetStream sees the CSP and MSP as the customer of the future.

“The enterprise customer has traditional defined requirements for solutions,” Petersen said. “In the future, it will be the CSP and MSP, who need to move workloads with agility from one data centre to another, and who support multi-tenant natively. It requires very high-performance data replicationing, and also the capability to tier data on low latency hardware. We take consolidated, centrally-managed sets of storage and enable them as individually-provisioned storage interfaces. It’s completely complementary to what the data centre is already doing.”

JetStream Migrate leverages the IO filers between the virtual desk and the virtual machine.

“It lets us replicate data to the cloud destination while apps run on-prem,” Petersen indicated. “The challenge with this live migration is that most solutions for it take a snapshot of the data, which can negatively impact on-prem performance. We are lighter weight. It is also fault-tolerant, so you also don’t have to restart the replication process if it is interrupted.”

Migrate is designed with two targets in mind – VMware Service Provider Partners  [VSPPs] and the  VMware Cloud on AWS.

“We are partnering with VMware in that cloud initiative.” Petersen said. “We remove friction to the migration to the VMware Cloud on AWS by simplifying the replication and VM migration process.” It is filly optimized for VMware, including vSphere-native data encryption and compression, and network bandwidth optimization.

Acclerate optimizes storage IO performance, and is available now for VMware vSphere, Windows Server/Hyper-V and Linux/KVM environments. JetStream says it will boost application performance by 3x to 5x, virtual machine density by 2x to 3x, and storage efficiency by up to 60 per cent.

“Accelerate is directly based on technology developed in SanDisk,” Petersen said.“The algorithms we originally developed are still working fine – algorithms that we found were being used by public cloud or private cloud service providers. The way we manage deployment over the servers has changed, and support for Oracle RAC clusters is new.” They also support ESXi, CSV, and AppDynamic.

JetStream is beginning to develop a channel.

“We are still reaching out right now, so it’s presently a fairly select group, but we will be introducing a partner program so resellers will be able to fulfil the product,” Petersen said. JetStream Accelerate is sold through channel partners and resellers, who presently include SHI and ePlus. Arrow does their distribution, and is especially important at the moment in Europe.

JetStream Migrate is currently in customer beta evaluation and will be generally available in Q2. The technology will be delivered by JetStream Software CSP partners.