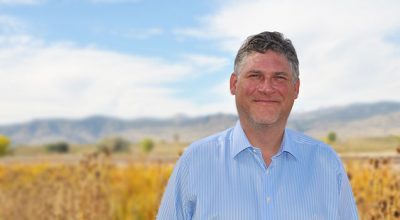 Spectra is often seen as a pure tape player, and that was the heart of their business for years, but within the last five years they expanded into other markets with their Verde solution, in the NAS storage space, and object storage, with their Black Pearl Converged Storage System. Tape automation is still important to their business, however.

“I’ve been in the tape business for 20 years, and every year we have competitors saying that tape is dead,” said Brian Grainger, Spectra Logic’s CSO. “It’s not dead, but the role of tape continues to change.”

Grainger noted that the long-term decline of tape has been arrested in the last two years, as the market has rebounded – benefitting from the rising tide of the massive amounts of data to be stored lifting all boats.

“Cloud is a good archiving solution if you have less than 100 TB or less of data,” Grainger said. “However, as you scale up, it has less value. Putting data in the cloud is easy and cheap, but it’s still expensive to get it back, and the bandwidth is an issue. It can be very expensive if your primary is destroyed in some kind of a disaster, and you need to restore it all from the cloud. So tape will continue to be key for second and third copies. The difference going forward will be that the area where cloud is competitive on price will continue to rise. I would expect that a year from now, the entry point for tape will go from 100 TB to 500 TB.”

The Spectra Stack Tape Library has a modular design, where users can start with a single LTO tape drive and 10 LTO tapes in a 6U module, and expand the library – module by module – up to 42 LTO tape drives and 560 LTO tapes per rack.

“It is a very simple, scalable secure library, which starts at a very low price point, working on a pay-as-you go type mode, for as low as 1 cent a GB,” Grainger said.  “Customers can replace drives very easily. It’s also easy for them to install, with wizards for configuration, if they do it themselves instead of using our white glove service.”

The Spectra Stack is designed for a 100 per cent, 7×24 duty cycle. It supports both full-height and half-height tape drives, and allows the customer to mix and match as they see fit. It also supports multiple generations of LTO tape drives and LTO media.

“Our MigrationPass feature lets customers take tape drives in an existing tape library and move them into Spectra Stack,” Grainger said, “You can go all the way back to LTO 5, and with some drive  manufacturers, to LTO 3. This is one of the biggest things that the market will gravitate to, because it saves a lot of money when moving from another vendor.”

The Spectra Stack library uses BlueVision software, which is similar to their enterprise BlueScale software. It includes a colour touchscreen, remote web interface, the ability to create up to 20 Shared Library Services partitions, built-in diagnostics, encryption, and encryption key management.

“The biggest issues people have tend to be with drives and media, so we have very extensive media lifecycle management which will preview both and notify the customer of impending failure before any issues develop,” Grainger said.

An optional BlueVision camera can also be mounted to the top of the library to provide a real-time and remote visual assessment of the robot.

Spectra Logic sees three principal markets for Spectra Stack, all of which they sell into extensively today.

“One is our traditional verticals – media and entertainment,” Grainger said. “It is absolutely perfect for production houses and post-production houses, and fits in well with BlackPearl object storage. It is also well-suited for video surveillance, which has not quite arrived yet at object storage and is still very tape heavy.”

Grainger identified the other likely markets as general IT standard backup, and tape consolidation.

The other new product offering is the Spectra T950V Tape Library.

“It is similar in looks to the T950, which is our bread and butter, but is not as flashy,” Grainger said. It lacks some of the ‘chrome’ features of the T950, such as the secure door on the back, the BulkTAP access port, and remote camera monitoring. That makes it less expensive.

“It can be 10 to 20 per cent less expensive, depending on configuration,” Grainger said, “It was designed for customers with very large data centres with lights-out operations, who want lower cost. It also fits well in certain markets which are very cost competitive, in Asia and the Middle East, in order to stay competitive with the market.”

Further economies, at the cost of a little slower performance, can come from the use of half-height drives.

“While the T950 has support only for full height drives, the T950V supports half-height as well,” Grainger said.

Spectra Logic also announced support for RDMA over Convergent Ethernet (RoCE), which is used by Cloud customers and the HPC market. IBM TS1155 Ethernet-attached RoCE drives will be available in the TFinity ExaScale in June 2018, followed later by availability in the Spectra T950 and T380 Tape Libraries.

“RoCE is an Ethernet drive for cloud based and open compute environments,” Grainger said. “We are the only company in the market that is integrating this drive into a mid-range tape library. I would stop short of calling it a game-changer, but it solves a lot of issues of moving that last mile of fibre cable.”