At a partner gathering in Toronto, Byrne recounted Dell EMC’s channel trumps – but also detailed where the company needs to improve, and provided broad hints about upcoming channel changes. 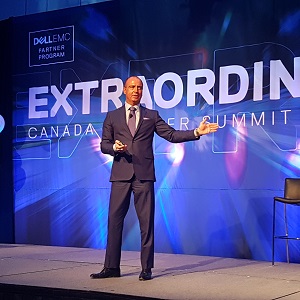 John Byrne during his keynote in Toronto

TORONTO — Dell EMC President of Global Channels John Byrne was the featured speaker at the Dell EMC Canada Partner Summit here Wednesday, and he used his time to give partners some detail on where they see opportunities looking forward for the channel. He also emphasized several times that he isn’t looking to grow the Dell EMC channel in any significant way. He wants instead to make the existing partners more productive

“We are committed to two things,” Byrne told his channel audience at the start of his talk. “Our vision is to be both the biggest and the best channel organization in the planet. I don’t want more partners. As we grow, we want to grow with you. That’s a big commitment. We want you to grow your top line and bottom line. Sell more of our portfolio. Sell more services.”

Byrne reiterated the same theme at the end of his keynote.

“We’re not looking for more partners,” he said. “We want you to come along for the journey.”

Byrne later elaborated on his statements, emphasizing that he wants to motivate the existing partner base to fully get with the program, and that while there are no plans to prune the number of partners, those who continue not to pursue Dell’s strategic goals for the channel will find themselves at risk on November 8 when the new tier thresholds are formally announced.

“We are not open to adding thousands or even hundreds more partners,” he said. “We also don’t need to have an overhaul of our partners. Not all of our partners are doing the things we want them to. Some still aren’t attaching services that we want. They will find themselves at risk with the new thresholds.”

Byrne also gave the partners some additional hints about what’s coming on November 8.

“Those selling more lines of business, and those adopting services will be looked on very favorably,” he said. “Expect that! We also have a number of partners who have been exclusive with us, and we are looking to add benefits for these exclusive partners.”

Byrne was frank in admitting that while Dell EMC had an enormous advantage in being able to design a new program basically from scratch, some problems had emerged. Some of these have already been addressed. Others, he said, were at the top of the priority list.

“We made some mistakes,” he said. “The data mapping when we came together was cumbersome, and  caught us by surprise, and it affected the portal and our ability to get training down quickly.”

While that issue has been fixed, some other issues remain.

“We have more work to do on increasing simplicity,” Byrne said. “We want rebates to be even faster. We are looking for some form of automation here, with the goal being to get you paid in six weeks.”

Issues over deal registration, which tend to be part and parcel of a hybrid go-to-market model, remain, Byrne acknowledged. These range from the traditional complaints that direct reps block deals from being registered to ones that putting opportunities on Salesforce also pre-empts deal registration.

“We have to flip our deal registration discussion from conflict to winning,” he said. “We have had 42 people written up by HR for violations here that happened last week. Know that we are serious about deal registration.”

Byrne also promised the partners that deal registration was something that they will hear Dell EMC talking a lot more about going forward.

Dell just announced enhancements to their PC-as-a-service offering this week, but when Byrne asked the room how many of them were playing in consumption models today, not a single hand visibly went up.

“Predictability on engagements is our number one problem here,” he said.

“We are being told by partners that we could be better operationally,” Byrne said, referring to the fact that individuals from up to three Dell EMC groups could be involved with a single partner. “There are  too many people touching you, and it’s really complex. We are looking to streamline things so there will only be one operational person beside the PAM who will look at part of your operation. That will be implemented by February of next year.”

Byrne reviewed the recent growth numbers by segment for the channel, and while the news as a whole was pleasing, especially in clients, servers and hyper-converged, he acknowledged there were a couple sore spots, and a few other minor irritants.

“In storage, we have 28 per cent share, but we have lost share,” he said. “In backup, we are at 55 per cent, but we have been losing share there too.”

Byrne said operational problems that need to be fixed are a main problem in storage, even though Dell EMC did hit their objectives in the space for the first half of the year.

“I hear our pricing is too hard, compared to NetApp, Rubrik and Cohesity,” he said, “Partners are telling us it’s more about agility and processes, and ease of doing business. Some of our smaller competitors can get a price within hours, or a day at the outside. We need to tighten up our processes. Sometimes we are taking a day. Sometimes it’s three days, and sometimes a week. That speed of operational execution was raised very vocally our Partner Advisory Committee.”

Byrne told partners that he has a team of people looking to reduce this time dramatically.

Changing how sales reps are compensated for storage is a possible – and he emphasized nothing has been decided – way of addressing this in part.

“If you have a rep who also has a storage gross margin they have to hit, they will negotiate longer at the expense of speed,” Byrne said. “The nickel and diming is a little bit crazy. We are asking ourselves a question about this  — we haven’t decided anything. But considering with the gross margins available, is it the right thing to do? I want us to have a ‘refuse to lose’ story in storage.”

Dell EMC introduced some storage promos in the second quarter this year to address these issues, but Byrne said more significant things are coming.

“Stay tuned for big stuff coming on storage,” he said.

Byrne said that that while increasing the attach rate on services has been a top priority, Dell EMC’s messaging around it hasn’t been clear enough, which has led to some confusion.

“CRN said that we are relaxing on services, and that is not true,” Byrne said in his keynote. “They said that in North America, thresholds for services will be cut in half because we are struggling with the partner community attaching services. That isn’t accurate. We have made one slight nuance. The way  we discounted a box with services has been changed. Before if I discounted a PC by 10 per cent, I would just discount against hardware and keep services whole. Now the discount comes across both areas.

“I don’t think we’ve done a great job of articulating the benefit of our services,” Byrne continued. “Our competitors offer a rebate on the percentage of services that are sold, and they pay 3 per cent – but just on the services. We pay 1 per cent on the total value of the PC and services combined, which is generally a lot more. We have to do a better job of saying with us the compensation is the box PLUS the service.”

Byrne also indicated some disappointment with the fact that even though the overall server numbers are excellent, some legacy EMC partners who had established relationships with other server vendors before have maintained them, even though he thinks there is a strong message in reducing the number of vendors that customers have to deal with.

“Many are good at selling servers — just not Dell servers,” he said.

The same process is also there on clients, despite excellent growth numbers.

“We want partners to sell more notebooks because they are more margin-rich, but not at expense of selling more desktops,” Byrne stated. “We want them to attach more notebooks, and a richer mix of notebooks. Sell a richer mix, attach more services, and attach more displays, keyboards and bags. Our partners are doing that. They just may not be doing it with us.”