The new P500, P700 and P 900 workstations, like the entry-level P300 introduced in the spring, are from the bottom-up redesigns of the old products they replaced. 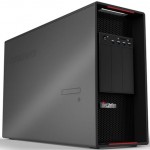 Lenovo has completed the complete redo of its workstation line which began last spring with its introduction of the entry-level P300 model. It has now announced the P500, P700 and P 900 workstations, which, like the P300, are from the bottom-up redesigns of the old products they replaced.

When Lenovo acquired IBM’s PC business in 2005, the workstations were not included, so Lenovo had to build its own from scratch, starting with zero market share. At that time the entry level series were badged the E line, the single processor models were S, compact models were C, and the high end dual processors were D.

“With the new launch, we have changed the naming, which we had had for several generations,” said Scott Ruppert, Manager of ThinkStation Vertical Marketing at Lenovo. “We found it wasn’t easy for customers to understand which was which.”

All the desktop workstations now have the P brand, with the entry-level P300 now being joined by the single processor P500s, the compact P700s and the dual processor P900s. The newly announced models enjoy the benefits of upgraded product from the component vendors, including the latest Intel Xeon processors and the newest NVIDIA Quadro graphics cards. Ruppert said that the new machines also include more than just the ‘table stakes’ provided by the new components.

“The three areas we focused on adding extra were reliability, usability and performance,” he said.

“We had always led in reliability in the previous generation, and we couldn’t backslide on that, and we have done it here with thermal design and acoustics,” Ruppert said.

Since keeping components cool is the key to reliability, Lenovo is using a patented tri-channel architecture to better cool key components. A unique fan-less, multi-channel air baffle draws in maximum airflow, directing cool air straight to critical system components. Warm air is forced out the back without ever touching other components along the way.

“The systems now have fewer fans – but larger fans – which move more air,” Ruppert said. “This also makes it quieter, and there are fewer parts, so it is less likely something can go wrong.”

The P series’ usability is enhanced by a modular design that provides tool-free access to every component.

“The new design was built entirely around this intuitive toolless design, so that it’s easy to swap parts and do servicing,” Ruppert said. “This is pretty much a requirement now, but we took it further than our competitors, to the point where you can easily swap out the motherboard if you have to.”

Intuitive red “touch points” guide users’ hands to where they can access components quickly and easily.

“This ease of use is something we aimed to do better than our competitors,” Ruppert emphasized. “We tried to simplify it so you don’t even have to take the pieces out in a certain order.”

The P Series performance will be enhanced because it supports DD4 memory when it becomes available next year. At the high end, the ThinkStation P900 supports up to three NVIDIA Quadro K6000 graphic cards and up to 14 storage devices.

Lenovo has been making a push to increase sales in the workstation space over the last two years, and has grown its percentage of the market from tiny to over 10%, although they still lag far behind HP and Dell.

“The response to the P300 has been great since it was introduced,” Ruppert said. “Although we did a very fast transition, our growth the last quarter is quite a bit due to the entry segment.”

Ruppert also indicated that initial feedback to the latest models has also been strong.

“We have been doing disclosures on the new models for the last nine months with customers, partners and ISVs, and the response has been awesome,” he said.

The new Lenovo ThinkStation P Series workstations will be available starting later this fall. Pricing is not yet available.