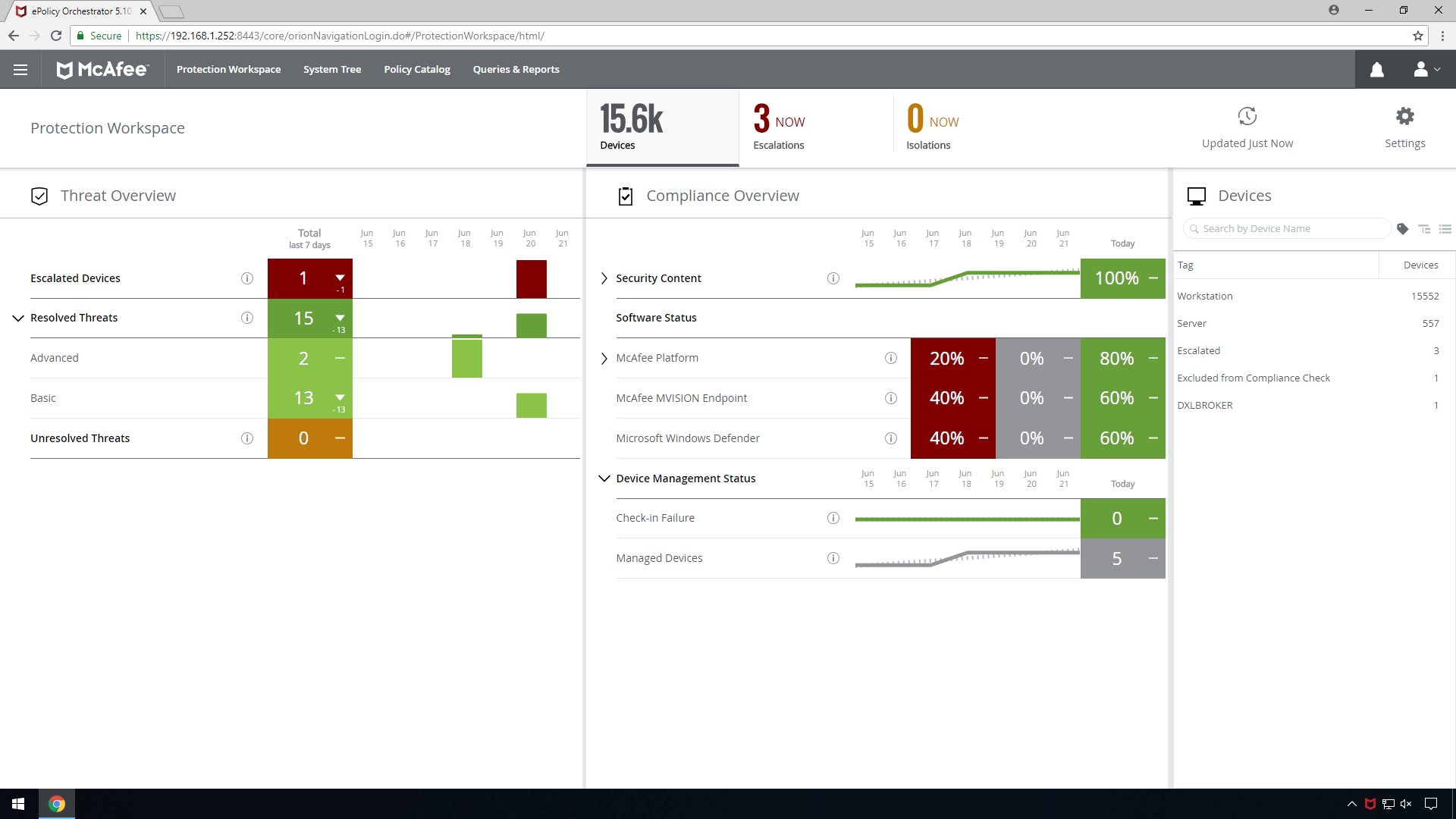 Cybersecurity vendor McAfee has announced a new solutions portfolio, MVISION. It consists of three components: MVISION ePolicy Orchestrator [ePO], McAfee MVISION Endpoint, and McAfee MVISION Mobile. The solutions themselves are not new, so there is a logical temptation to see this mainly as a branding exercise. But that’s not really the case here – although the branding is clearly a part of the story. All three of the solution components add significant new functionality, and are united by their strategic focus, which includes a subscription-based licensing model and a focus on the commercial and enterprise markets – essentially from 2,000 seats up.

“We see MVISION as our new strategic product family,” said Ben Cody, VP of Product Management at McAfee. “The MVISION ePO provides an enterprise SaaS version of our ePO orchestration solution. MVISION Endpoint adds the ability to layer our anti-virus on top of Microsoft Defender, getting the added capabilities of our solution while just having the one solution to manage. MVISION Mobile provides the ability to apply common policies to all kinds of devices. To do all of this justice, we needed to create a new branding and packaging capability, and so the MVISION brand was the result.”

McAfee MVISION ePO provides McAfee’s venerable ePO orchestration and automation solution as a SaaS service. McAfee DID offer ePO on a SaaS model before – but with the huge caveat that this older SaaS version was aimed at the SMB market.

“That’s a major change,” Cody said. “Our SaaS ePO before was mainly focused on the SMB space, but the MVISION ePO is focused on the enterprise, and is a fully-tenanted SaaS product. Enterprises also want the power of ePO in a SaaS model.”

The ePO UI has also been completely revamped, to provide better visibility into the situation, and allow administration with half the number of clicks as before.

“Policy management and event management now are in a consolidated interface, whereas before it was compartmentalized,” Cody said. “At the same time, we have made ePO super simple to deploy and to migrate from an existing ePO environment.”

Cody said that the new MVISION Endpoint also represents a huge step forward in providing customers with a different option than before. In this case, they leverage the native security in Windows 10 to add a lightweight agent that adds McAfee’s signatureless advanced threat protection to the Windows Defender component within Windows.

“We have taken our advanced threat protection capabilities and packaged them separately so that you can deploy them with Microsoft Defender,” he stated. “What this does is remove one of the moving parts – signature-based AV – where we go with Defender for that, and layer us on top. Traditionally, the model in our industry has been to compete with Windows’ own security tool. We are the first company to change the model so that we coexist with Microsoft.”

Now the reason why third-party security vendors like McAfee originally emerged was the pretty widespread belief that Microsoft’s own security was second-rate, and that the focused specialists brought more value to the equation. Cody said that things have changed around the value that the internal Windows product now provides.

“Microsoft has now changed things with the new quicker Windows RS release sequences,” he said. “As a result, the decision is often being made at the CIO level for organizations to go with Defender, in order to reduce the number of moving parts on the endpoint. A big part of value in this co-deployment is that it can be done with a single policy. You can configure it once in ePO and administer it once for Defender as well. This new approach is the best to making sure that we can secure that environment.”

McAfee MVISION Mobile provides for visibility and threat defense for all mobile assets, which are managed by McAfee ePO through a single console.

“This is a brand new capability,” Cody said. “We made a move because customers don’t distinguish as much between different types of devices these days, and just want to manage all these devices together. This goes beyond traditional Android and iOS and Linux, and gives the ability to apply a common policy.”

McAfee MVISION will be sold as one product with three components, through a single price, on a subscription basis.

“It will go GA in the early August time frame,” Cody said. “We are working with early adopters right now.”

Almost lost in the higher-profile hubbub over MVISION was a second McAfee announcement, that ePO is now available on AWS, providing a public cloud option to deploy ePO. While separate from the MVISION announcement, it is related to it, in that like MVISION, it broadens the choices customers now have to consume ePO.

“We are committed to ePO classic on prem, or in public cloud, or in SaaS.” Cody said. “Customers now have all three options available to them. Customers have put ePO on AWS themselves for years, but this makes it very simple for them.”

Cody explained that by working closely with AWS, McAfee created an API in AWS Quick Start.

“This lets them take ePO code and deploy it quickly in AWS,” he said. “Quick Start will ask how many nodes they have. Then all that stuff spins up, usually in around 45 minutes, although it can be as low as 30 or as high as 60. It uses the Amazon RDS relational database, so the customer doesn’t have to license or deal with SQL Server.” It also removes the need to manage backup and recovery.

McAfee ePO can now be acquired from the AWS Marketplace.