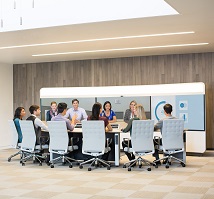 Cisco has announced major enhancements to the IX5000, the triple screen video endpoint at the high end of their TelePresence collaboration portfolio. The enhanced product has half the bandwidth, half the power, and half the install time of previous models, which results in a much lower TCO for the customer.

“The product price for the IX5000 will remain unchanged, but the capabilities go up significantly compared to their competitors, with the result that it introduces dramatic new price points for TCO,” said Richard McLeod, Senior Director of Worldwide Collaboration Channel Sales at Cisco.

McLeod stressed that while the list price does not go down, the customer’s TCO will be cut by half.

McLeod said that while the IX5000 has not just been limited to enterprises who demand the highest quality product in the past, the new cost implications will expand its market.

“We have seen the triple screens sold down to state and local governments and to mid-size companies,” he said. “However, this certainly will break down even more barriers for video adoption.”

A common problem with this type of large multiple screen system has been that the rooms have had to be heavily customized, notably with the lighting, but Cisco says with this IX5000, zero room remediation is necessary.

“It doesn’t require special room lighting, which is a major plus,” McLeod said.

The halving of bandwidth and power requirements also make the system much more attractive than before.

“The whole system now uses as much power as a hair dryer,” McLeod said.

McLeod said that from the perspective of user experience, the new IX5000 is improved over its predecessor, and anything else in the market.

“It has three 4K ultra HD cameras and theater quality sound [courtesy of 18 custom speakers plus a subwoofer] which delivers an amazing experience,” he said. The three cameras capture the entire room in ultra-high definition. Powerful graphics processing provides smooth transitions between people and content, and whiteboard images are digitally corrected to provide remote participants a clear view of the content without the need for additional cameras.

“The whiteboard mode is set up to show everyone in a square rather than on an angle,” McLeod said. “The camera also follows you around with SpeakerTrack technology.”

Ease of use has also been improved. On the older product, users would often waste several minutes finding adapters to connect their laptops to the video system to present content. With the new Cisco’s new WebEx integration with TelePresence, a user now just has to open their laptop, connect to Wi-Fi and start presenting. If WebEx for TelePresence is not being used, a universal video adapter has been designed, which retracts into the IX5000’s tabletop, and which has easy connections for any device a user would want to connect.

“The taking 50 per cent less time to install will reduce costs significantly,” he said. “The new TCO reality will expand the market by bringing the power of the triple screen immersive room to any room they want to approach. They can also go back to their install base for this and suggest an upgrade, because the TCO and the quality enhancements make it a good proposition.”

Availability is scheduled for December.