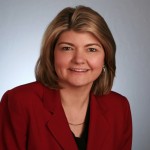 By day, Sandy Carter is worldwide channel and midmarket chief for IBM Software Group. But by night (and day, and most times in between), Carter is something of a guru and evangelist for social media.

So much so that she’s acquired the nickname Social Media Sandy – a nickname and image she not only lives, but also promotes and thrives on. In addition to tweeting up a storm and participating in other social media tools, Carter has written on the subject.

ChannelBuzz.ca sat down with Carter at Avnet Technology Solutions‘ IBM Partner Summit last week in San Antonio to discuss social media in the channel in general, and her advice for those just dipping their toes in the water in particular.

The first thing Carter advises any interested party – reseller, customer or otherwise – when it comes to social media is to always listen to what’s happening in their marketplace. “Pick the words you care about, whatever they are, and figure out what’s being said about you,” she said.

That can be as simple as setting up a search for appropriate keywords – company name and key products or markets – in an application like Tweetdeck, or as complex as using a tool like IBM’s own business analytics tools. (We’ll forgive her that plug.)

From there, it is a matter of finding out who the key influencers are on the topics you care about, and following and influencing those influencers. That may seem a daunting task at first, but Carter quotes research showing that the real influencers are in the single digits of online users.

“Six per cent will have a strong point of view, and everyone else follows those people,” she said, adding that similar numbers have been shown in Big Blue’s own research and third-party numbers for Forrester.

The second big thing is an offshoot of the first – get local. With the proliferation of geotartgeting tools including geolocation-centric tools like Foursquare and Facebook Places, as well as the integration of location tagging in major sites like Twitter, is becomes a simple and exceedingly cost-effective (read: free) way to promote your business to local customers.

Carter gives the example of her own local drycleaner in New York, whom she helped set up a Twitter feed to give out special offers via “coupons” to local users. The result: a 15 per cent spike in new customers.

The trick, she said, is to not just market oneself via Twitter but to always add value. The drycleaner, she said, didn’t get followers just for the coupons – they were in the minority of the tweets. Instead, the drycleaner focused on offering tips and advice, both general broadcast and answering specific questions.

“It all starts with listening to the marketplace,” she said.

Carter said she’s working on finding ways to spread the geolocation love to partners – including having Foursquare check-in points at last week’s Information On Demand show in Las Vegas, just to get partners thinking about the potential of the technology.

But lest solution providers think this is just a marketing opportunity for themselves, Carter said there’s also a great deal of interest in implementing location-based services in the channel’s customers – particularly among retail customers.