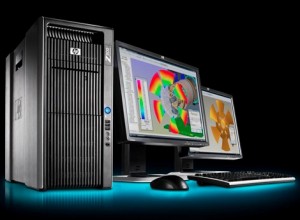 HP’s workstation business is bouncing back quite nicely.

Jim Zafarana, vice president and general manager of HP’s workstation group, said that 2010 has been “a tremendous year of recovery” in both the economy in general and particularly in the workstations market. Year-over-year, the company is seeing 50 per cent growth “worldwide and in every region,” and in the latest calendar quarter, the company’s workstation business grew 33 per cent in terms of units, compared to 24 per cent for the market overall.

HP recently opened its Fort Collins, CO workstation group headquarters to media for the first time, and ChannelBuzz.ca was there to find out why HP’s workstation business is growing at 1.5 to two times the market since 2002. Here are some thoughts on what’s in the workstation market for you.While HP and Dell are neck and neck worldwide for the lion’s share of the market (at a commanding 43 per cent apiece), Zafarana said he expects to take the lead in the current quarter. Here in Canada, the company still has some points to make up on its rival. Ira Weiss, category business manager for workstations at HP Canada, said the company’s plan for closing that gap involves getting its resellers more involved.

The workstation market is one field where HP is looking to get its channel more involved. Weiss said that the company’s top-ten list of desktop resellers and workstation resellers map pretty much perfectly against each other. His goal is to extend that reach into the rest of HP’s major desktop partner base.

Sometimes selling workstations can be a little tough, especially with customers who see them as overpriced desktops. Weiss said channel enablement is key to ensure partners are better able to communicate the value proposition of the workstation.

“I still wonder whether it’s a widely understood product,” Weiss said. “We get a lot of pushback on customers not wanting to spend on things like error-correcting memory. If you’re doing simple spreadsheeting, that’s fine. But if you’re doing scientific calculations, that’s something you really need.”

To help get that message home, HP frequently hosts partners and their customers alike at the Fort Collins facility. The company believes that showing the process its workstations go through in development and testing can go a long way to convincing customers that workstations are the right solution.

A tour of the facility reveals a single overarching theme – a sense of pride in the quality in the company’s workstations offerings. Yes, the workstation is a more expensive purchase than a desktop. But the company aims to show through the research and development, testing and in some instances torture it puts into its workstation products, that the units are worth the higher price tag, and commensurately higher margins.

The tour details the research and development testing that goes into the company’s workstation lineup – every component offered by HP in each of its workstations is put through the test for performance, interaction with other components, and even power consumption and noise factors. It tests the emissions of all of its workstations to all international standards for office devices.

The facility also includes an extensive physical testing facility that aims to show how they’ll take extreme heat and cold, radiation and physical abuse. In one particularly impressive demo, the company shows how they vibrate, shake and drop their workstation boxes to ensure that the pieces, once put together, will stay together over the bumpiest roads and given the most gorilla-like delivery crews.

Currently, the company’s sales mix skews towards the low end of the offering – dual processor systems represent 30 per cent of its sales, Zafarana said, while single processor units make up 70 per cent of the mix.

Top opportunities in Canada include digital content, CAD/CAM, scientific computing, research and education and application development. Part of the challenge is that in a lot of the organizations that could have need for workstations, it’s only a very small part of the user base at each organization that’s likely to be in the workstation space.

Another opportunity is with companies looking at long-life desktops, and among those looking for high-end graphics processing. Sometimes it can be something as simple as the power supply options for graphics cards that can drive workstation sales. “We now offer a 600W power supply for the Z400 – you can’t run those on an entry workstation or high-end desktop,” Weiss said.

Because it’s often an application-centric sale, Weiss said there are great opportunities to be had by hardware-based VARs to connect with applications resellers and drive entire solutions, including the hardware and software customers need.