CloudJumper announces that their Cloud Workspace Management Suite in now available on the Azure Marketplace. They also spotlighted their integration with Microsoft Windows Virtual Desktop at the IT Nation Connect event, and created a new position of VP Strategic Alliances, where the management of the Microsoft relationship is a critical element. 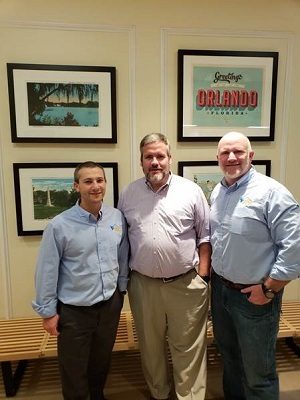 ORLANDO – CloudJumper has announced that their Cloud Workspace Management Suite [CWMS] is now available on the Microsoft Azure Marketplace. CloudJumper announced the news at the IT Nation Connect event here, where they are highlighting their recent integration of CWMS with the Microsoft Windows Virtual Desktop solution, something that they consider to be of signal importance. CloudJumper also just announced the appointment of Robin Brandl to the new position of VP Strategic Alliances, where he will manage the Microsoft relationship along with a few other key partners.

CloudJumper is tightly allied with Microsoft, and has been available on Azure for years, but their now being available in the Azure Marketplace is extremely important, said J.D. Helms, CloudJumper’s President.

“It’s a really big step because it completely automates the deployment of the platform in the Azure infrastructure,” Helms said. “It connects natively, with a single sign-on, and shows important information like who has delegated admin rights. Being in the Marketplace is also helpful to MSPs, because it helps them drive their infrastructure spend with Microsoft, which is a big deal now.”

CWMS provisions, manages, and optimizes Windows workspaces in Azure, creating and managing Remote Desktop Sessions and Windows Virtual Desktops  with full integration to the Office 365 suite and access to files stored in OneDrive or Azure Files. An Office 365 email address and password lets users access a fully interactive desktop in the Azure cloud or stream RemoteApp applications to a local device.

“Being in the Azure Marketplace really streamlines the process of being deployed natively into Azure,” said Max Pruger, CloudJumper’s chief revenue officer.

“It takes the deployment process down from something that could take a week down to about two hours,” Helms added. “The wizard itself only takes out 15 minutes to use. The rest of the two hours is the process of spinning up.”

The integration with CWMS with the Microsoft Windows Virtual Desktop solution that CloudJumper demonstrated at Connect is also critical, Helms stressed.

“What Microsoft is doing with the release of Virtual Desktop is as important as Office 365 was,” he said. “It is going to change the landscape in ways that many just haven’t thought through.”

“Office 365 turned Office into monthly revenue,” Pruger said. “Virtual Desktop will turn the OS into a monthly subscription process that will run in the cloud, and they will roll the license into Office 365.”

Virtual Desktop has further strengthened the alliance between Microsoft and Cloudjumper, Pruger added.

“We are joined at the hip with Microsoft,” he said. “Microsoft has named us as one of their leading partners, and they only have seven in total. We helped them build Microsoft Virtual Desktop.”

The expanding relationship with Microsoft was one of the factors behind CloudJumper creating the new role of VP of Strategic Alliances and hiring Robin Brandl to fill it. His role is to manage the relationships with large strategic partners like Microsoft, VMware and Citrix – all of whom he has worked for. Brandl was most recently global business development manager for VMware’s Horizon Cloud on Azure business unit, and before that, he was the enterprise mobility/RDS national sales lead at Microsoft, and the global Microsoft evangelist for the Worldwide Microsoft Alliance Team at Citrix.

“Citrix is primarily a competitor, although VMware is not,” Brandl said. “VMware has a competing product, but they really have a different focus than us.

“Amazon AWS and Citrix are our main competitors,” Helms said. “We don’t really view VMware as a competitor.

“There are lots of conversations about the competition between Microsoft and us versus Amazon and Citrix,” Pruger said.

CloudJumper is also about to conclude another important strategic measure.

“CWS is being certified on VMWare VMC on AWS, their private cloud deployment available as a managed service,” Helms said. “It has been in the process of going through final resting and we expect it to be done this week. We will become the first desktop-as-a-service provider certified on VMC on AWS.”

CloudJumper now has over 1500 partners, which run from small MSPs with 10-15 employees with million dollar annual businesses on up, although their larger customers tend to buy CloudJumper’s software, not their service.”

“It’s not really about the number of partners overall, but the number of active ones, and we are north of 350 there,” Helms said. “We have seen the level of engagement in the market increasing over last six months. In the last six months, the size of the opportunities and the partners we have worked with have also both grown significantly.”