The first Western Digital offering for this space is the Ultrastar DC ME200 Memory Extension Drive, which augments physical DRAM with between 4x-8x in memory capacity. It will be available to all WD channel partners. 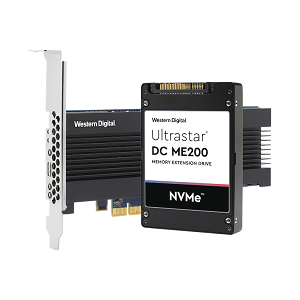 Today, at the Supercomputing 2018 show in Dallas, Western Digital Corporation is announcing its move into the in-memory computing market segment with their enterprise portfolio. Their first offering is the Ultrastar DC ME200 Memory Extension Drive, a NAND-based solution which augments physical DRAM with up to 8x in memory capacity, providing a major cost advantage over all-DRAM systems.

“We are entering a new category for us in the enterprise storage space, which we are announcing as part of the SuperComputing 2018 show in Dallas,” said Eddie Ramirez, Senior Director of Product Marketing for the Enterprise Group at Western Digital. “We call this product a Memory Extension Drive. We have taken a pretty innovative approach, because the Memory Extension Drive makes a storage product look like a memory product to the system. It unlocks a lot of performance and capacity for an in-memory system.”

Ramirez said that the Memory Extension Drive helps to resolve what has been a bottleneck with SSDs.

“DRAM prices continue to rise,” he stated. “We call it software-defined memory, although it is both a software-defined and a hardware-defined solution. With our software, we can map NVME SSD into memory to really augment DRAM capacity in a system. That’s extremely valuable given how expensive it is to fully populate a server with DRAM today. It can increase memory capacity up to 8x, augmenting the physical DRAM.”

There is a small cost to performance compared to physical DRAM, but it is dwarfed by the increase to memory capacity.

“We can achieve 80-94 per cent compared to a system running all-DRAM, at a much lower TCO,” Ramirez said. “It expands server memory at a fraction of DRAM cost, while maintaining near-DRAM performance.” Western Digital’s own testing found that when using the Memcached application, users get 85-91 per cent of performance, and a 4-8x memory expansion. Using Redis, they got 86-94 per cent of DRAM performance with 4x capacity. My SQL produced 74-80 performance at 4-8x capacity.

“We feel the product is unique because the software is tied to the hardware, with its own memory management,” Ramirez said. “It’s superior what people do using DRAM as the primary solution, which is using load-reduced DIMM that lets you double the amount of DRAM in a system We think having a NAND-based solution instead of DRAM is better. It’s better than what you would find in a standard Linux kernel today.”

The Ultrastar DC ME200 is drop-in ready and PCIe-device compatible with most Intel x86 servers, and requires no modifications to the operating system, system hardware, firmware or application stacks. For expandability, a 1U server can typically support up to 24TiB of system memory using the Ultrastar DC ME200 for in-memory compute clusters.

“This is ideal for large databases, and data warehouse use cases,” Ramirez indicated. “We think that it will excite people, especially the sort of people who come to the SuperComputing show.”

Western Digital is making the ME200 available to channel partners, as well as selling it direct.

“We are making it available to all our channel partners,” Ramirez said. “We are doing channel training for this. We have partners who serve universities and government labs and other high-performance computing customers, as well as end customers who have large databases. If you are being asked for a server with more than 500 gigs of DRAM they should look at this. It will save them some money.”