Brent Allen, Pure Storage’s Canadian country manager, was at the Pure//Live event and discussed the company’s progress in Canada with ChannelBuzz. 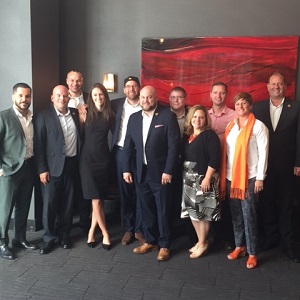 The Pure Storage Canada team at the Pure//Live Toronto event.

“Canada has sure become an important market for Pure,” said David Hatfield. Pure’s President, who kicked off the presentations at the Pure//Live event. “We have grown like a weed.”

2017 has seen Pure Storage double down on its investment in Canada. The company had no resident Canadian country manager, and was managed out of the United States until March of this year, when longtime Cisco Canada exec Brent Allen was brought in as Pure’s first country manager in Canada. Allen had been at Cisco Canada since 2005, most recently as General Manager, Data Center Architecture, a role he had held from August 2016.  They also brought on board their first Canadian channel manager, Jill Martin.

“Since then we have been growing as a team,” Allen  said. “We doubled our sales staff, from three to six. We have also increased our sales engineers by 70 per cent. We now have coverage in Vancouver, Calgary, Toronto and Montreal.”

The Montreal hire just came on board last week.

“He will drive home the Pure Storage message in Quebec, and also provide a conduit into the Atlantic provinces,” Allen stated.

Pure’s staff work primarily at partner sites, and at the labs of Cisco, their strategic partner.

“We have a flexible work model,” Allen said. “Our partners open their doors and give us space to work with, and we use the Cisco Demo Labs extensively. Cisco is a strategic global partner, and our relationship in Canada is very tight.  We have Pure-Cisco FlashStacks built in Montreal and Toronto, with Calgary on its way, and we use them to run six to eight customer demos a month.”

The Cisco team was featured at the Toronto Pure//Live event.

“We’ve had a lot of difference alliances around storage, but the alignment with Pure is one unlike any that I’ve ever seen,” Chris Coburn, Data Centre Product Sales Specialist at Cisco Canada, told the Pure//Live audience. “We really appreciate what they bring to the table because it augments what we do at Cisco very well. Cisco is completely committed to the Pure Storage partnership. We are in this to be winners. In addition, the culture from Pure is infectious. We love working with them because of that culture.”

“We are doing a lot of events with Cisco,” Allen indicated. “They are our converged infrastructure partner – straight up – and they have helped us a great deal in creating awareness.”

Pure partners with selective strategic vendor partners, but the others tend to be focused on the backup and availability space.

“Our strategy from the beginning was picking strategic partners and working closely with them,” Allen said. “We are partnered with Veeam, Cohesity, Commvault, and Rubrik, and they will also be with us at Cisco Connect road shows across Canada.”

Softchoice is a Pure Storage reseller who works with them in both Canada and the U.S., although most of the business today is in Canada.

“We also work with the traditional storage vendors, and try to be agnostic, giving the customer a best-of-breed solution that best fits their needs,” said John Husband, Softchoice’s VP of Sales for Canada. “Pure has a disruptive technology, but they can also be complementary to existing storage infrastructure as an add-on. There is considerable buzz in the market where customers ask us to bring in Pure. Their Evergreen program [which upgrades in place over time as needed without forklift upgrades, downtime or performance impact] is also popular.”

Softchoice positions Pure as a complete solution for the midmarket – basically about 500 to 5000 employees – and as a complementary solution in the enterprise.

“In the midmarket, it’s an alternative to Compellent from Dell EMC,” Husband said. “We have had good success with Pure in the enterprise, but mainly as a complementary solution to higher end manufacturers like EMC and Hitachi. Their customers include one of Canada’s largest telcos. At this point in time, the enterprise business is complementary, but that may change in same places as they add arrays over time.”

Allen thinks the disruptive nature of the technology will inevitably lead to its expansion in the market.

“In that sense, I think it’s very similar to UCS when Cisco first introduced it,” he said. “It’s a fantastic product, which offers a great value proposition.”