The announcements are geared at beefing up NetApp’s data analytics presence in mid-sized businesses, following up a related enterprise initiative earlier this year.

NetApp has made a trio of announcements directed at mid-size businesses, particularly around improving their ability to process data analytics. They include a new entry-level all-flash array, the E2800, upgraded SANtricity software, and a partnership with data lake vendor Zaloni to improve management and governance of data in data lakes.

“Over the last year, we have been emphasizing data analytics, especially with our E-Series portfolio,” said Mike McNamara, senior director product marketing at NetApp. “Back in March we announced more enterprise-focused analytics bundles around Splunk and Hadoop. Now, we are making similar announcements aimed more at the mid-tier, specifically around the new E2800”

The NetApp E2800 is an entry-level all-flash array for midsize businesses and remote offices that are looking to support data analytics applications, as well as demanding use cases like media streaming and video editing.

“The E2800 also supports hybrid, but we are really pushing the all-flash portion of it,” McNamara said. “It is entirely new hardware, based on 12 GB SAS and new disk shelves, with really nice compact packaging. We believe it will ultimately replace the E2700. This is three times faster when configured for all-flash, which means a significant increase in performance.”

The E2800 also comes with Express Packs with both hardware and software, in different capacity sizes.

“These are competitively priced to sell to the end customer, and should make it easier for reseller partners to both order and sell systems,” McNamara said.

NetApp also announced the 11.3 version of its SANtricity software, the distinct software used by the E-Series rather than the ONTAP OS. 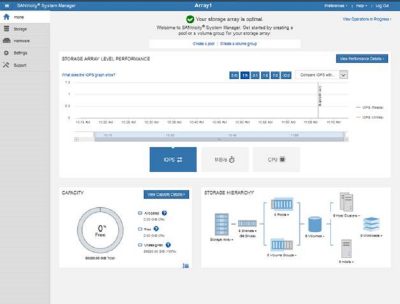 “This new version of SANtricity improves the capability in the prior version around SSD read caching, which has led to random read environments seeing 10 to 200 per cent increases in speed,” McNamara stated.

The new software also has a brand new management tool, SANtricity System Manager, which simplifies deployment and access to data with a modern onbox browser-based GUI.

“This is a very easy interface to manage,” McNamara said. “The E2700 has one, but is nowhere near as robust and is not browser based.”

The third part of the announcement is a collaboration with Raleigh N.C.-based data lake-focused vendor Zaloni.

McNamara indicated that while NetApp had done some work with Zaloni in the past, they decided to expand their relationship with them here.

“We chose to formally partner with them because of their expertise in data lake management, to address this unique position in the market,” he said. NetApp E-Series and NetApp StorageGRID Webscale storage options now enable organizations to define logical data lakes both on and off premises, as well as provide end-to-end management and governance of data in the data lake.