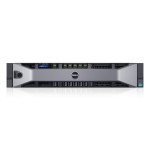 With most new product announcements, a key element is the enhanced feeds and speeds which come from component vendors’ regular upgrades of their hardware. That’s certainly the case here

“We have refreshed the inside of the box with the next generation of Intel Haswell processors, as well as new graphics technology from NVIDIA and AMD,” said Don Maynard, Senior Product Manager for Dell Precision Workstations.

Maynard indicated that Dell is giving its customers more choice in their CPU and graphics options, particularly with the entry level and rack machines.

“We are now offering a much larger range of CPU options to give customers more flexibility,” he said. This includes adding additional Intel processors for the Tower 5810.

“It’s part of our strategy to make these even more valuable to customers, as it gives them more choice when they have combinations for interactive applications [which are primarily done by single core machines] and analysis or simulations [which benefit by additional cores to facilitate multitasking].”

Graphics options are also being expanded.

“Traditionally, we kept the highest end graphics card on the dual systems,” Maynard said. “But some customers who use the lower end ones also want top graphics.”

Memory will be getting a major boost in these models. They all require the new DDR4 RDIMM memory, and will ship with up to 1 TB of it. But memory capacity will really take off a little later.

“We will be able to double memory capacity because of the DDR4 in conjunction with a new DIMM size, load reduced LRDIMM,” Maynard said. “This will be available hopefully in December, perhaps in January.”

Not every workstation user cares about memory, but the ones who do – in oil and gas in particular – have massive data sets, so this will be invaluable for them.

Dell is also increasing the number of memory SKUs, to give customers more options here, as they are doing with the CPUs.

On the software side, the new systems feature the latest version of Dell’s performance enhancing software tool, the Dell Precision Optimizer v2.0, an exclusive feature of Dell Precision workstations.

“This is an automated system we have developed with ISV partners which identifies customer systems and identifies where we can do tweaks to improve performance,” Maynard said. Dell says industry standard benchmark tests indicate Dell Precision Optimizer v2.0 increases application performance by up to 121 percent.

The other software enhancement comes from an extension of Dell’s partnership with Teradici. The new Teradici PCoIP Workstation Access Software makes secure, remote access for mobile workers possible in a matter of minutes.

“It can be used when you travel or work from home or are in front of a customer, as it can connect to the workstation remotely,” Maynard said. “It’s a low cost option for customers who have occasional need to access remotely.”

The new Teradici software client is compatible with the Tower 5810, Tower 7810, Tower 7910 and Rack 7910 as well as earlier Dell Precision workstation systems.

Maynard said that while the workstation market as a whole is healthy, it is really strong at the lower level.

“The growth is really in the lower end of the space,” he said. “We are attacking that marketplace by bringing workstation class technology at more of an entry cost. Our workstation notebook is similar in cost to our Latitude notebook.”