Identity management vendor Okta officially opened their new Toronto offices Wednesday, a four story facility where many of the employees are part of a large Toronto-based engineering team. Okta used the launch to highlight their commitment to Canada, and a Toronto non-profit that is receiving a grant from their Okta for Good program. 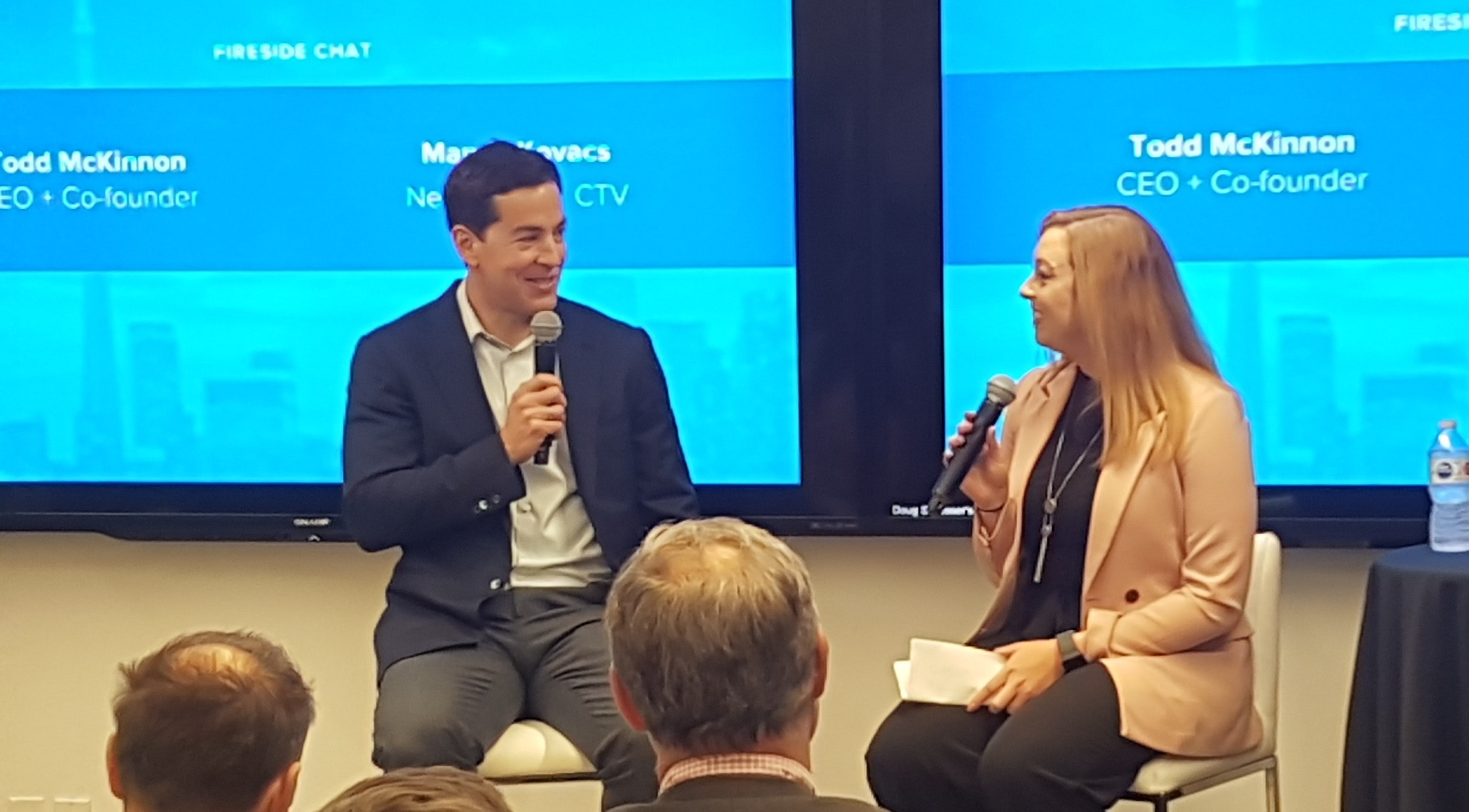 TORONTO – On Wednesday afternoon, identity management provider Okta formally launched their new offices in Canada. At a packed venue of customers, partners and investors in one of King St. West’s few remaining former warehouses that had not previously been turned to offices or condos, the company heralded its new four-story digs as signifying the emergence of Canada as a strategic priority for the company, rather than the tactical asset it has been in the past.

“This is our third – perhaps our fourth – office in Toronto, although it is our first large, branded one,” Todd McKinnon, Okta’s co-founder and CEO told the gathering. “There is a distinction, however, between a big strategic vision of what you want to accomplish, which operates at a high level, and a tactical level where you manage things day to day and try not to screw things up.”

McKinnon stressed that Okta’s operations in Canada had initially been tactical, but have now become strategic..

“Canada at first was a tactical asset for us,” he said. “We put a few people into an office in Toronto tactically, and they were incredibly successful for us. We kept building the team, and expanding.”

The new offices can seat 90 people, which isn’t full yet, although McKinnon quipped the rent is so high that it would be nice if it was. The surprising thing is that 45 of the people who do work there are in product engineering, a surprisingly high number, which reflects the fact that Toronto is one of Okta’s R&D hubs.

“We can always add more people who may be customer-facing,” McKinnon said. “Having an office here also lets people have more confidence that we are committed to this market.”

Okta provides cloud-based secure connections between people and applications through multi-factor authentication, and their ultimate goal is to become the identity layer in any piece of software.

“We are about identity and security, but we are really about helping customers adopt a technology future, around cloud computing and the things associated with that,” McKinnon said. “The term ‘digital transformation’ has become something of a trite buzzword, but it does convey a simple concept – connecting with customers through websites and mobile apps. It’s easy to do – but not at scale. We are at a stage where it has become pretty much unanimous that companies need more direct relationships with their end customers.  But it’s challenging, because when you do things at scale, you can have unforeseen impacts.”

McKinnon said that people like themselves in the technology industry also have an innate bias into thinking more customers are digitally advanced than they actually are.

“In tech, we tend to think every customer experience is online,” he said. “But it isn’t. It’s still relatively early. And when you do get it online, you still have to manage it, and deal with the unforeseen downsides.”

McKinnon said that in the security space where Okta operates, the increasing frequency of high profile attacks have heightened awareness of risks and impacts.

“Still, the vast majority of attacks are pretty simple,” he said. “Our challenge to simplify things and make it easy for customers, and give them a template to shore things up. With us, this is something that we do through strong multi-factor authentication.”

“Very early on, we determined that it was important to give back to the community,” he said. “Okta for Good reflects the fact that we have been very fortunate in starting the company at right time. It tries to be sensitive to what employees care about in the community.”

Okta utlilized the launch event to spotlight the Bridge School, a Toronto-based non-profit that delivers free, in-person training courses for female developers and designers, with a focus on enhancing the technical skillsets on people who are already in the industry, and looking to advance beyond junior level positions.  Bridge provides free 11 week software development and product design programs to improve skills and increase confidence, to candidates selected from a combination of existing technical skill and hireability. Each 11-week cohort is sponsored by an organization, and Okta will be a sponsor of the next cohort.

“The Bridge School is committed to increasing advanced education in the tech industry and pushing for more gender diversity in the industry,” said Emily Porta, the Bridge School’s Executive Director. “Okta is now a co-sponsor of Bridge, and Bridge is now a part of Okta for Good.”

“We are really excited about the future, but we are still just getting started,” McKinnon concluded. “In 5-10 years we will look back and think what a quaint little company we were, back when we opened this office in Toronto. There are a lot more customers we need to reach. But this is very strategic investment for us.”