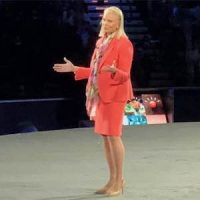 LAS VEGAS — If the last 50 years of the technology industry have been defined by Moore’s Law and Metcalfe’s Law, IBM is betting the next 25 will be defined by Watson’s Law.

IBM CEO Ginni Rometty called the current time the dawn “the third exponential shift” led by the technology industry. “It’s a time where your ultimate competitive advantage is to outlearn everyone else,” Rometty said at the company’s Think 2018 conference here.

And while AI and machine learning has been largely championed by new companies to date — the big benefits have been realized by relatively new entities like Uber et al — Rometty adds an important corollary to Newton’s Law: “In this era, many can win.” And in fact, the advantage in many cases may be with established enterprises, those who have a massive amount of historical data that may be largely unanalyzed today, but can be fed into machine learning systems and allows a more complete view of any decisions an enterprise can make.

“I think when we look back at this era, it just might favour those who have a history,” Rometty posited.

But for established companies that have not yet redefined themselves around this idea of rebuilding themselves around their collected knowledge and gaining insights from it, there’s a need to rethink the role of IT. Rometty describes this as “going on the offense” and “becoming the incumbent disruptor” — that is using some of the new AI-enhanced power to disrupt from within. She describes IBM’s own process of doing this within its massive Global Services division, which has recreated and rearchitected itself around “The Services Platform with Watson,” which she says allows the company to deliver its services faster, smarter, and better based on its “memory” of 30 years and millions of incidents across thousands of customers.

She said current estimates are that $2 trillion of additional value can be unlocked by making better decisions within business, and that means one of the most important things businesses can do is to embed these learning capabilities in “every process you run.”

The second major piece of advice is for businesses to “leverage digital platforms” — both those built internally that are built for the specific organization, and those built by third-party experts in a horizontal or vertical stack for the business, for example, a smart HR platform or CRM platform. She expressed IBM’s view that over the next five years, businesses will become “a whole set of platforms.”

The third big piece of advice is that companies must “empower people with all forms of digital intelligence,” stressing that “man plus machine always gets better results than either alone.” Companies will ultimately have to “think about how to transform any business, any job, to team people and machines,” she advised.

In talking about the societal impact of these changes, Rometty also focused on this point of people plus processors rather than people versus processors, saying that she is “100 per cent convinced that jobs will change, and that not everyone is going to have to have a PhD to work in this space,” but adding that it’s incumbent on every business now to start preparing the world for a scenario where jobs are “not white collar, and now blue collar, but new collar.”

“We’re all going to have to work on building skills,” she said.

While all this talk of exponential learning may seem at worst somewhat hyperbolic and at best somewhat future-looking, the company did make a major announcement to back its stance. John Kelly, senior vice president of cognitive solutions and IBM Research, said the company’s chips have been fine-tuned for machine learning and AI, and are learning four times faster than competitor’s CPUs. But the company announced that in concert with Nvidia’s newest AI-focused GPUs, it’s been able to boost that number fo “nearly 50 times” the field.

“We’ll learn in one minute, what used to take over an hour to do, and with roughly one tenth of the machine size,” Kelly said.