HPE says that ProLiant Gen 10 is not only the world’s most secure Industry Standard Server – but that none of their competitors can possibly catch up. 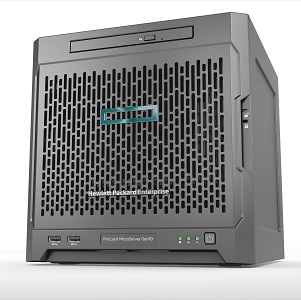 The bottom of the line: The new HPE ProLiant Gen 10 MicroServer

LAS VEGAS – Today at their Global Partner Conference here, Hewlett Packard Enterprise announced the refresh of its ProLiant server line with its Gen 10 offerings. HPE says that this is far more than a typical hardware refresh, however, for it boasts security and other upgrades that the company says place the new ProLiants well above the rest of the market.

“This is such a big milestone for the industry,” said Antonio Neri, Executive Vice President and General Manager of the HP Enterprise Group. “This will be an incredible door opener for all of you,” Neri told the assembled partners in his keynote. “This is the most secure industry standard server you will find on the planet.”

Andreoli said the Gen 10 ProLiants are a breakthrough in three ways – security, agility and economic control.

“We have created the world’s most secure industry standard servers,” he said. “How can we make this claim? Because in each Gen 10 server, we have a created a unique silicon fingerprint, to prevent firmware attacks. The server will not boot unless the server matches this unique print.” This unique link between the custom HPE silicon and the HPE Integrated Lights Out (iLO) firmware – what HPE calls the “silicon root of trust” – will ensure servers do not execute compromised firmware code.

“We are the only vendor who can do this,” Andreoli said.” That’s because HPE has total control of both its own custom-made silicon chip and the server-essential firmware.

“None of our competitors can possibly catch up, so with Gen 10 you have a very differentiated solution,” he told partners.

Andreoli said that technology acquired from Niara, a behavioral security analytics startup that HPE acquired in February, is the secret sauce here.

“With this technology from our Niara acquisition, the server scans millions of lines of code to detect malicious behaviors,” he said. “The system endlessly trains itself and learns, so our customers don’t have to be paranoid any longer.”

Andreoli said that this security continues through end-of-life.

“When the server is disposed of, its embedded data can not be retrieved any longer,” he stated.

“We are also announcing HPE Intelligent System Tuning, in partnership with Intel,” Andreoli said. “The new generations of Intel Xeon CPUs have the ability to vary their clock speed. This creates a booster effect. The Intelligent System Tuning lets us manage this seamlessly, which puts a seamless turbo in your server. It means about a 10 per cent gain in performance.”

“Nothing will happen in the customers’ balance sheets that they couldn’t anticipate, because they only pay for what they use,” Andreoli said. “There will be no surprises.”

HPE is introducing a new HPE Capacity Care Service aimed at mid-sized companies. They are also announcing new IT Investment Strategy Workshops to help companies develop an IT investment strategy with funding models aligned to an IT investment roadmap.

The Gen 10 HPE ProLiant Servers will be available in the summer of 2017.