Riverbed CEO Jerry Kennelly kicked off Riverbed’s partner event with a forceful keynote in which he stated that Riverbed’s move into SD-WAN will move the company into mainstream networking and create a massive new market opportunity for both Riverbed and its partners, who are their entire route to market. 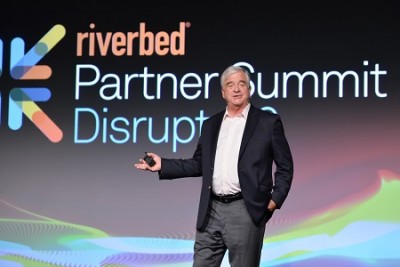 SCOTTSDALE AZ – Riverbed is well into the process of moving from being a dominant player in the WAN-optimization niche, to being a dominant player in networking period, and becoming a five-billion dollar company. That was the message that an enthusiastic Riverbed Founder, Chairman and CEO Jerry Kennelly related to the company’s top partners at Riverbed’s second annual Riverbed Partner Summit here.

“Last year, I put on a pretty brave face just after we did a leveraged buyout and went private,” Kennelly told the 180 partners from 105 companies which account for 84 per cent of Riverbed’s revenues. ‘A year later, it has gone just great. Private is the new black. Going private let us do restructuring that is hard to do when Wall Street is breathing down your neck. As someone who did 52 earnings calls over 12 years my quality of life has gone way up.”

Kennelly related how Riverbed had increased their focus by selling off parts of their business to Brocade and NetApp.

“We eliminated a lot of distraction,” he said. “It helped to create a clear story for our sales reps. The result is that in our Q4 2015, we did $280 million in revenue, 10 million more in revenue with 600 fewer people.” 20 per cent of this came in multi-product bookings, which was up 12 per cent year over year.

Kennelly emphasized that this rationalization is part of driving forward, to make Riverbed a major player in mainstream networking.

“In 2004, we hit the market with the first real optimization for networks,” he said. “We dominated this area, but we were still a niche. It was our desire to go beyond that and get into mainstream computing and really disrupt the world. With our move into SD-WAN we are doing this now.”

The acquisition of German SD-WAN vendor Ocedo in January 2016 accelerated this transition, which Riverbed had begun the previous year with its Project Tiger initiative.

“We were going to do all this development internally, but Ocedo had some specialized technology, with their orchestration software sitting in a cloud format” he said. “This let us pick up almost a year.”

Kennelly said that while he acknowledged some think Riverbed is perhaps six months late in bringing major SD-WAN product into the market, he thinks their timing is excellent, and the timing is still good even in the more pessimistic scenario.

“Riverbed is not anti-Cisco, but what they offer is last century’s SD-WAN – routing in Layer 3 on hardware on packets,” he said. “This is a perfect time for us to hit the market. Cisco has end-of-lifed Integrated Services Routers as of October 2016. This huge market will be up for grabs.”

“By going into SD-WAN now, we go from being a great company confined in a niche to a mainstream networking company. Now I can envision Riverbed as a five-billion dollar company.