Hotlink has a unique solution which leverages VMware vCenter to easily manage non-VMware assets in the datacentre, and while their channel is still small, they are aggressively looking to expand it. 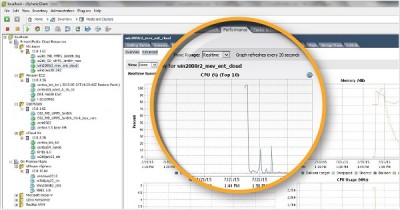 Founded in 2010, HotLink is led by Lynn LeBlanc, one of the two co-founders. LeBlanc sold her previous company, FastScale, to EMC, which moved it over to VMware shortly after. FastScale was also in data centre management, and there is a fair amount of technical cross-pollination between the two companies.

“I’ve known Lynn since 1996, when I hired her to work for me,” said Jerry McLeod, HotLink’s VP of Business Development. LeBlanc and fellow co-founder Richard Offer, HotLink’s technical lead and VP of Engineering, both came from FastScale, as did some of the other engineers. “FastScale’s biggest customer was VMware, which is another obvious link, and we leveraged our knowledge of VMware at HotLink.”

“Our technology is not about trying to interject new management into customers’ portfolios, but instead leverage vCenter, which they already know how to manage, to manage non-vCenter environments,” McLeod said. It utilizes existing VMware vCenter-compatible tools and workflows like orchestration, self-service portals, and PowerCLI scripts, and automation across hybrid resources.

HotLink Cloud Management Express is the third offering HotLink has brought to market to date, but is the most comprehensive.

“All three products are based on the same philosophy,” McLeod said. “The first, Hybrid Express, is a little more narrow and a lot deeper than Cloud Management Express. The second averages Amazon as a disaster recovery solution and is focused around the midmarket. Cloud Management Express is our broadest portfolio product, and can cover the largest number of clouds and hypervisors of any management solution.” This includes public cloud support for Microsoft Azure, vCloud Air, OpenStack and Amazon EC2, and on-premises support for OpenStack, Microsoft Hyper-V, Citrix XenServer and Red Hat KVM.

“Ordinarily when you add a VMware hypervisor, the system sees a VMware agent,” McLeod said. “Our patented technology allows our own agents to look like a VMware agent to the system, which is how we are able to support the non-VMware technologies with VMware management.”

The target market for this tends to be larger companies, or at least those who want to leverage bursting capabilities in the cloud.

“Customers are usually a little more upscale in terms of size because they need to have enough instances to make them a problem,” McLeod said. “If you just have a few, you don’t need this. More instances makes it worthwhile, especially larger companies for whom 100 instances is nothing. Companies with a lot of web services who doesn’t want to buy servers to run them, and others who want to leverage the cloud, especially for bursting, can also benefit from this.”

HotLink has a hybrid model and does direct sales at this point, but the road map calls for significant channel expansion.

“We are still getting reference customers from direct sales, but over time we would rather do more channel than direct,” McLeod said. Today they have a couple dozen partners in North America, which does include Canadian partners. They are single tiered at this point, and work directly with partners rather than through distribution.

“We are starting smaller with the channel but we need more,” McLeod said. “There are not that many channel people today who are really cloud knowledgeable. We have been starting with boutique people, and with consulting and services-oriented partners more than hardware ones.”

More cloud partners are likely to come through the Microsoft and Cisco channels in particular.

“Microsoft will make a huge push through their channel, as will Cisco with their Intercloud, so we will see more cloud people appear through them,” McLeod said.

He stressed, however, that they are actively recruiting.

“It’s a great opportunity for new partners,” he said. “This is a solution that partners can install in a couple of hours. It doesn’t require a big professional services capacity. If the partner has been mainly on-prem, this will let them brand themselves as a cloud provider, which is what people want today. The people who get in early will also have the advantage of becoming the experts sooner.”

HotLink Cloud Management Express is available now. Pricing is $USD 175 per workload per year for 150 workloads.