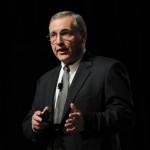 LAS VEGAS – After a year that saw Avaya go through massive changes in the integration of Nortel and its redefinition as a collaboration company, company executives are setting an aggressive tone for next year.

“Growth” was the major word of the day at the company’s 2011 Americas Partner Conference at the MGM Grand here. It’s clearly the company’s goal for next year. But another word came up in CEO Kevin Kennedy’s assessment of the year that was its fiscal 2010: “Intense.”

Kennedy called it a year of restructuring and of R&D, but said that “now, it’s time for a year of growth.”

“This is a moment for our team to go out and meet the marketplace with a sense of purpose and a sense of pride,” Kennedy told partners. “In essence, we have an entirely new set of products, each and every one of which solves problems for customers and makes them more productive.”

In 2010, major milestones included the Nortel integration, which Kennedy admitted caused “a lot of fear and drama” in the early days but in the end didn’t distract the company from getting a unified Avaya/Nortel roadmap and saw five major product line releases with a sixth, the company’s data centre and cloud strategy, slated for release before the end of the calendar year. The year also included a network deployment for the Vancouver Olympic Games that saw “unanticipated demand – the equivalent of running three Super Bowl Sundays every day consecutively for 17 days” but still answered the bell each time. Other highlights include a $5.4 billion (U.S.) run rate, and 650 deployments of its Avaya Aura infrastructure.

Kennedy painted a bright picture of the future for Avaya based on its decision to architecturally base all of its products on Session Initiation Protocol (SIP), likening the growing protocol’s potential influence to the transformative role TCP/IP played in the creation and nurturing of the Internet. He said the company has “just crossed a fundamental point” when it comes to the dominance of SIP, as its Flare Experience video and collaboration user interface transitions the company from focusing on delivering cost savings for customers through SIP to creating new user experiences. In fact, he quipped, one partner gave him a very backhanded compliment about the UI on the new Flare Experience tablet.

“Do you really mean to tell me Avayans made this user experience?” Kennedy reiterated the partner’s query in a pleasantly surprised tone.

But if user interface and experience hasn’t been at the forefront for Avaya in the past, it certainly is now. Kennedy described the combination of the open SIP infrastructure and innovation around user experiences as key to competing with “goliaths who like to lock customers in.” “We want to be the answer and choice that is open,” Kennedy said.

Joel Hackney, the company’s senior vice president of global sales and marketing and president of field operations, called the company “a new Avaya” and said it was going to get more aggressive in the market after being seen for years as a company back on its heels. “We are moving from defend mode into aggressive growth mode,” Hackney said.

He pointed partners at traditional Avaya strengths including contact centre, enterprise messaging and unified communications, as well as new opportunities like the data networking division picked up in the Nortel purchase.

He said the company would move to increasingly “reward growth” in the channel, part of an overall move by the company from channel program that delivers greater profitability on sales volumes to one that provides incentives for specialization and expertise.