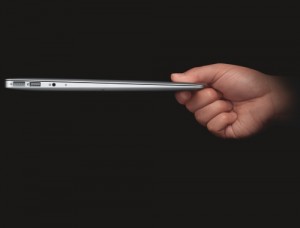 Apple’s Wednesday media event pretty much lived up to expectations, introducing the next generation of the MacBook Air and providing a first look at the next version of Mac OS X, 10.7 Lion. But there were still some surprises.

The MacBook Air took top billing as Steve Jobs’ infamous “one more thing” for the day, but it was the software announcements that included the biggest surprise, including the decision to launch a Mac App Store in the style of the app store on its iOS mobile platform.

The MacBook Air, as expected, gets updated to a new look that’s a bit thinner and lighter than before, and bypasses both hard drives and solid state drives for flash storage. Also as expected, it’s available in 11-inch and 13-inch configurations. Because of the flash storage, the company’s able to get more (claimed) battery life out of the new models, with the 13-inch Air boasting seven hours of battery life while the 11-inch junior version stays at five hours unplugged. Both systems offer a unique 30-day standby time due to the flash storage and a new system that dumps memory to storage and shuts down all hardware after a brief “sleep.”

Perhaps the biggest surprise is how much the lower-end 11-inch MacBook resembles a netbook. But don’t call it that. Apple CEO Steve Jobs isn’t exactly a fan.

The Mac OS X 10.7 Lion preview itself was pretty scarce, showing off a new application launcher, the ability to support full-screen applications and a new “Mission Control” starting point. But the big eye-opener in the software announcement was the introduction of the Mac App Store.

Apple promoted Lion as much more like the iPad, and the App Store is the biggest example of that similarity. As it has done on its iPhone and iPad mobile platforms, Apple will try to create a single source for downloading and installing applications on its desktop operating system. And as it has done on its mobile platforms, Apple will take 30 per cent of the cost of those applications for doing so. The decision to attempt to single-source desktop applications appears to leave Mac developers with a troubling choice – retain full control over their app and full revenues for their sales and risk being ignored if users flock to the Mac App Store as they have to iOS, or submit to Apple’s requirements for Mac apps and see revenues drop 30 points for being exposed to a larger audience. It also appears to limit developers’ ability to access certain functionality and APIs within the operating system.

InformationWeek’s Thomas Claburn offers some great analysis of the App Store, including comments from several prominent Mac developers who are interested in but wary of the App Store.

There were a couple of other surprises from Apple Wednesday in addition to Lion and the Air:

Got an hour or two and want to get inside Jobs’ Reality Distortion Field yourself? Apple’s posted a video of the event to the Web.