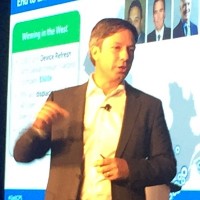 TORONTO — Dell Canada’s channel business is expanding at a rate three times the overall Canadian IT market, the company announced kicking off its annual Canadian Partner Summit at the Westin Prince hotel here.

“We’ve accomplished some amazing things with each of you over this year,” Fine told attendees at the company’s third annual gathering of its Canadian partners.

After Fine’s introduction, Dell Canada boss Peesker took that stage, thanking partners for a big year, and sharing a lot of numbers backing up the company’s assertions on its performance.

“When we engage together, we’ve been winning,” Peesker told partners. Of 10,000 “new to Dell” Canadian opportunities identified by Dell and partners last year, Peesker said that the company and its partners have thus far closed over 3,000, most of which were competitive displacements.

Peesker said the company’s efforts to move business through channel partners — including compensating 100 per cent of its sales people on business done through the channel — has borne fruit for both Dell and its partners. Peesker noted that business through “channel mandated reps” has grown 68 per cent year over year. The wins were even greater when looking at the subset of customers who were moved from working with Dell exclusively direct, to working with Dell through a channel partner. In that group, the company saw 129 per cent year-over-year revenue growth, Peesker said. Adding new customers together with partners, Peesker said, is the most important thing Dell and its partners can do to raise channel profitability.

“The best way to profitability isn’t to increase margins on a deal, it’s do to more deals,” Peesker said. “The more we do across the stack, the more there is for us to share in, and I’d love to see rebates go up 100 per cent again next year as a result of the work we’re all doing.”

Some other metrics shared by Peesker: