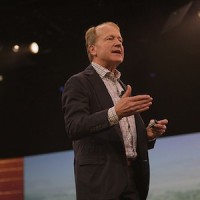 John Chambers makes his case for digitization at his final Cisco Live as CEO.

SAN DIEGO – John Chambers used his final major keynote as Cisco CEO to issue a harsh message to 26,000-plus Cisco customers, partners, and engineers at the company’s Cisco Live event here: organizations and governments must be ready to go digital, or they will fail.

Chambers message here was very much in line with his presentation in late April at the company’s Partner Summit in Montreal, albeit with the additional emotional gravitas of it being the last time the venerable CEO would address such a large audience of those close to his company. His presentation in Montreal was made just days before the company announced he would hand over the reins of the company to Chuck Robbins later this month.

“The question is, are we ready to run the fastest race that’s ever been run?” Chambers asked attendees. “The digital world will change our life, our health, our business models, and the pace of business.”

In his typical soft-but-rapid-fire speaking style, Chambers walked the attendees through the role IT will play in what the company calls the transformation to a digital economy, highlighting the example of Cisco’s own transformation, both over the last few years and on a more accelerated basis, in the few weeks since the succession of Robbins was announced. Since Robbins was named CEO, the company has announced the pending departure of numerous top executives, including other former top contenders for the CEO spot like Rob Lloyd and Padmasree Warrior, as part of a re-organization of the leadership team. The speed of those transitions, he said, would not be possible if not for the “fast IT” style the company now champions, developed internally by the Cisco CIO Rebecca Jacoby.

While external measures may have been positive for Cisco, Chambers said the internal changes were needed to meet the increase of pace brought on by this digital economy motion. He used it as an example point to illustrate his belief that if you see an inflection point coming, you don’t wait for your current momentum to break before shifting towards the new wave, or you risk missing the change altogether.

“Seventy per cent of you [in IT] will enable your companies to become digital, But only 30 per cent of you will succeed,” Chambers warned attendees. “The number-one reason companies won’t succeed is because they don’t reinvent themselves.”

Chambers admitted the goal of his presentation was to make the audience sweat.

“This is the transition you need to be leading your company through. And if you, as IT, do not deliver, your company will fail,” he said.

Aside from the tough talk, the presentation was also an opportunity for the long-serving top executive to take a final bow. He walked through different times Cisco (and by proxy he) had been correct about market transitions when their opinion was unpopular, unwelcome, or even mocked, such as the transition of voice to a free service over IP, and the UCS business launch. One last demo with his 30-year partner-in-crime Jim Grubb provided a final chapter to that long-standing Cisco tradition, and also told the Internet of Everything story the company is championing.

Chambers enjoyed several ovations form the faithful through the course of the presentation, particularly when he bid the audience a farewell and thanked them “for what’s about to occur,” both within the networking giant and in the industry and world at large.

Then he was joined on stage by his now-formal heir, incoming CEO Robbins. Perhaps to further get over the point that Robbins is “the chosen one,” rather than completely handing over the stage to his successor, Chambers stuck around to “interview” Robbins, at times jokingly grilling the executive on what he plans to do differently from Chambers.

Robbins said his goal was to drive “a culture of moving quickly, of transparency, and of authenticity,” and used the recent organizational changes to illustrate those traits. Still, he said, “we have to move faster on all fronts, in every decision we make.”

A big part of building that speed will be in driving simplicity – not the easiest goal in a customer of the size and complexity of Cisco.

“What we do is inherently complex,” Robbins admitted. “But we have to simplify it, to clearly articulate it internally, externally, and help you and our teams move more quickly together.”

Still, Robbins estimated the opportunity for the company, it’s partners, and customers, as “10 times what we’ve seen so far.”

“In three to five years, I’d like to believe we’re on our way to you believing that we’re the one partner than can help you digitize your business and that we can together tackle some of the biggest challenges in the world.”

Chambers, along with Robbins, will for the last time hold court with the international press here at Cisco Live later Tuesday afternoon.