IGEL North America CEO Jed Ayres stated what the company sees as its advantages in the current market, and also announced further signs of their growth, including the hiring of Steve Bell as their first VP of Global OEM Sales. 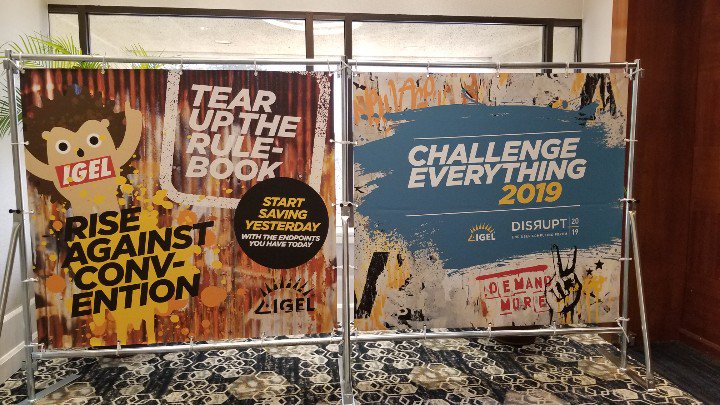 SAN JOSE – German-based software-defined endpoint management company IGEL is now the number three player in their market in North America – in a market with two dominant players, Dell and HPE. However, at IGEL’s Disrupt event here, they laid out an aggressive agenda to change that. Jed Ayres, the CEO of IGEL North America, as well as IGEL’s CMO, made an aggressive presentation emphasizing the company’s view of itself as an aggressive innovator, well-positioned to displace one or both of what they see as legacy dinosaurs.

Ayres noted that IGEL was originally formed as part of a small German company, Melchers, where the man who became the founder, Heiko Gloge, started developing the technology that became IGEL in the Melchers building’s attic – with no windows. Ayres said that was a good metaphor for the company, in wading through an assortment of smaller companies to challenge an endpoint market dominated by two companies, Dell and HP.

“The Attic sums up the spirit of IGEL – hardworking and scrappy, and a company turning the industry upside down,” Ayres told the conference attendees in the kickoff keynote.

Ayres recounted IGEL’s trumps over the last year, capping an ascent from the number seven slot when the North American operation started in 2016 to the number three slot today.

“This is the year that you have seen us break out,” he said. “We passed $100 million in revenue, which is a major breakthrough point for any tech company. We sold half a million software-defined endpoints, and are on a trajectory to get to a million in the next 12 to 24 months. We have a 50 per cent software growth rate. We closed seven deals in seven figures last year. The two largest in the history of the company came in in the last 48 hours of the year. I don’t think there’s a more relevant or faster growing company in this space.”

Referencing IDC’s spring 2018 report on the sector, as well as IGEL’s momentum since, Ayres stressed that IGEL is poised to continue its ascent. He noted that Brad Tompkins, IGEL’s VP of Sales for North America, who came from Red Hat, has the view that IGEL can be the Red Hat of the edge.

“That’s how we can be a billion dollar company,” he said. “I believe we can do it. It’s a pretty audacious goal, but I believe it can happen. We are taking market share. We believe that in the next 18 to 24 months, we will be number one in this market. IDC tracks the market in a hardware lens though, so the issue is defining the category that we sell into.”

IGEL started out in Germany as a hardware player, but began its transition to software-defined  in 2010, with the first release of their SD-OS. When they set up an office in San Francisco, hired Ayres, and moved aggressively into the North American market in 2016, one advantage they enjoyed is that it was comparatively easy to emphasize the software-defined message here.

“In Europe, we have the challenge of being very much seen as a hardware company,” he said. “We didn’t have that in issue in North America, where we were a fresh canvas.

“First is Windows 10, and the complexity of managing it,” he said. “It is too insecure and too hard, so people look at cloud and virtual solutions. Second is Dell’s ThinOS. It has been the biggest gift to IGEL in the past year. It is getting long in the tooth and hard to manage, and is not aligned with Citrix or VMware. Our big takeouts have been ThinOS. The third is that Linux rules. It owns over 70 per cent of workloads in the data centre and is starting to own the edge the same way. Fourth is Amazon Workspaces. We are the first Linux OS to connect to it. Fifth is Microsoft’s Windows Virtual Desktop. IGEL is a great way to onboard into that as well, We are agnostic. Sixth is the fact that we are software-defined. There is no lock-in. The market leaders don’t have an answer for that.”

Ayres noted that IGEL continues to build out their team, announcing that Steve Bell, had just been announced as VP of Global OEM sales.

“Hiring Steve to have someone dedicated to driving these OEM relationships is an important part of our maturation,” he said. “We are assembling the most kickass team of virtual endpoint people anywhere in the industry. Every quarter, we have 10-12-15 new people joining us.”

Ayres also announced IGEL is increasing its investment in its support team, with additional hires

“We are building out a robust 24/7 support organization,” he said. “Our support is good today, but it is going to get a lot better.”