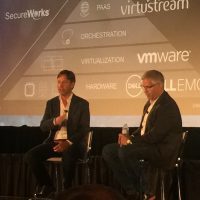 With those words, Dell Canada president (now Dell EMC Canada commercial division president) Kevin Peesker kicked off a significantly larger Dell Canadian Partner Summit at the Sheraton on the Falls here. And sure, Peesker walked the assembled solution providers through some of the major changes to impact our world since last fall’s version of this event — Brexit, the Rio games, the emergence of Donald Trump as a US presidential candidate. But it was pretty clear what he was actually talking about.

“We’ve been busy,” Peesker told the audience with a smirk, then admitted that if, this time last year, a partner had suggested to him that Dell, still then getting used to private life, “should do a $60 billion acquisition,” he wouldn’t have believed it likely or possible. And yet, just over a month after last year’s version of this event, that’s exactly what happened.

Fast forward to this year’s Canadian Partner Summit, and it’s a new venue and a whole lot of new faces, coming as it is six days after the official merger of Dell and EMC into the new Dell Technologies organization. There are a lot of new hosts and leaders in the room, with Peesker and his channel chief Tara Fine joined by former EMC Canada (and now Dell EMC Canada Enterprise Division) leadership, including country manager Michael Sharun, channel chief Michael Kerr.

Peesker and Sharun walked partners through the new organizational structure, with client solutions under the Dell brand, and infrastructure solutions and services under separate divisions under the Dell EMC banner, as well as the Canadian leadership of both sides. Again, there were no surprises there, with Sharun and his team constituting the Dell EMC Enterprise Division side of the house, while the pre-merger Dell Canada team remains the same under its new name of the commercial division

Peesker called the new combined entity “the world’s largest privately-held company with world-class enterprise sales and support from the edge to the data centre and all the way around,” and said that the integration of the two cultures had been easy because basically the whole Canadian organizations had been familiar working with each other pre-merger as partners.

“This combination provides a situation where one plus one equals a whole bunch,” he said.

Both executives made their pitch to have more partners selling more of the newly-combined portfolio. But it was Sharun who made the case loudest and longest. That’s hardly surprising. EMC has a large channel, but has not been the kind of “big tent” channel program that Dell has had going forward, so Sharun and the enterprise division has the most to gain from getting more of the “other side’s” partners engaged.

Sharun shared that this year, 80 per cent of EMC Canada’s business is through the channel, a figure which he called a “world-leading” number within EMC, and he said served to show how important the channel’s solution reach is for the former EMC business. That’s especially true because of the increasingly deep focus of that business on solutions-centric areas. Sharun said the company’s business in Canada was less than 40 per cent primary storage, and detailed the areas where growth is coming — converged infrastructure in all its various forms, data protection, and emerging areas such as Internet of Everything, analytics, and data lakes.

It’s in those areas that Sharun urged partners to grow their focus, a message seemingly crafted mostly for the 70 or so per cent of Dell Canada partners that had not been EMC partners per-merger.

Although it was Peesker who used the phrase “better together” to introduce the combined entity, it was Sharun for whom the idea was central to his presentation. He told partners that they could participate in every piece of the high-growth business available, but that they “can’t participate in every piece from every manufacturer,” a bid to get more partners to think across the portfolio and focus on the Dell EMC combo for new avenues of growth.

“There are very few places you can go to get all the pieces” for a solution like converged infrastructure, Sharun told partners. “There’s one, I think. And it’s here in this room.”

The executives talked up a “rolling thunder of announcement” in coming months designed to show the companies have been still actively developing and not just focused on getting the deal done,, discussed the benefits of taking the former EMC business off the “90-day shot clock” of life as a publicly-traded company, and stressed openness and co-opteition where it makes sense for customers, such as in the former EMC having converged plays with both the former Dell and rival Cisco.

Both executives stressed the power of the merged organization — “I don’t know how you can serve customers better by getting smaller,” Sharun quipped — but stressed it was vital to remained focus on innovation and meeting customer need.

“We’ve got a huge portfolio and opportunity, but we can’t go in to customer meetings and talk about the weather,” Sharun warned. “We’ve got to do our research, be factual, be deliberate, and drive a solution. Motherhood and apple pie aren’t going to work.”