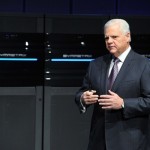 NEW YORK CITY – Along with a brand new product line targeting a new customer segment and the channel in the SMB space, EMC Tuesday introduced a wide array of products across all of its lineups.

It’s part of what chief marketing officer Jeremy Burton called “the biggest launch in the storage industry, period,” including 41 new products and services in all.

EMC chairman and CEO Joe Tucci set the stage, walking analysts, customers, partners and press through the company’s history in the storage market, going from the first Terabyte-sized array in 1994 to the 35.22 Zettabytes the company expects to see by 2020.

Along with its traditional enterprise storage stronghold, Tucci said growth is being driven by “big data” – the explosion in storage taken up by things like high definition video, computer rendering for films, video surveillance, medical imaging, geophysical exploration and gene sequencing.

“There’s a massive opportunity for you, our customers and our partners, at this intersection between cloud, big data and enterprise data,” Tucci told attendees.

Bringing together CLARiiON and Celerra

Pat Gelsinger, president and COO for information infrastructure products, introduced the company’s new platform in the midrange, the VNX lineup that includes “a full family … delivering efficiency, speed and simplicity.”

The seven products in the new VNX family all support block- and NAS-level storage management and are brought together under Unisphere, the company’s new and simplified management console.

Gelsinger boasted the new VNX products are three times as efficient as the products they replace, offering 3x the performance on database tasks from Oracle and SQL Server, and cutting the response time and boot time for VMware virtualization environments by two thirds.

In all, the VNX family includes seven products.

While it’s focused on growing its presence in the low-end and midrange, Gelsinger said the high end remains crucial to EMC, largely because of the kind of growth it’s seeing in terms of storage in the space. In 2002, he said, the company saw its first 10 customers cross one Petabyte of storage. Today, the company has some 1,000 Petabyte-plus customers, en route to 100,000 Petabyte customers in 2020. And Gelsinger said the company expects to welcome its first customer to the “Exabyte Club” just next year.

“Data just continues to get bigger and storage environments continue to get larger,” he said.

EMC introduced a free upgrade to the software on its Symmetrix lineup that offers 55 new features and doubles performance in many situations, Gelsinger said.

He detailed how the company is “moving off Fibre Channel,” by using SATA and serial-attached SCSI  disk for low-end storage and moving to flash storage for more frequently accessed data. In fact, he said, EMC shipped “more flash than the rest of the industry put together” in 2010, totally nearly 10 Petabytes of enterprise flash. The move results in a 40 per cent jump in performance while cutting storage costs by the same 40 per cent.

On the green front, Gelsinger said that by using the company’s tiering capabilities, customers would use 270 million KwH of electricity, enough to power about 24,000 homes.

New features in the VMAX software include Data @ Rest Encryption and Federated Live Migration for enterprise data centres, effectively allowing three levels of movement around the company’s storage – within the array, between arrays and between data centres

Gelsinger declared the company was taking on “the last hideouts of tape in the data centre” with the new Data Domain Archiver, essentially making it an add-on to customers’ existing Data Domain backup environment that supports disk at the archiving level. Gelsinger posited that the technology would transform the archiving market the same way the expansion of disk into backup has changed that market. “It’s important because you run out of night,” he said.

On the backup front, the company introduced the Data Domain GDA (Global Deduplication Array) appliance, which promises to speed companies’ nightly backup routines, particularly amongst customers that have “tens of Terabytes” that need to be backed up on a daily basis. The technology is a culmination of a ramp-up that has seen 175x increases in throughput over top-of-the-line backup options from 2004, Gelsinger said.

EMC described the launch of 41 new products in all as record-breaking, and ran with that theme in not-so-subtle ways. The company brought 26 dancers from Connecticut-based dance troop Pilobulus on stage and set a new official Guinness World Record by cramming all of them into a Mini Cooper. And a pre-recorded segment from Miami featured stunt rider Bubba Blackwell jumping 40 EMC Symmetrix storage devices on a Harley-Davidson (an EMC customer, naturally!) motorcycle.