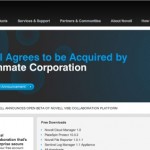 Dust off the marketing materials for NetWare, it’s time to get a little nostalgic.

Monday morning brought the news that Novell, a familiar name to many longtime VARs but perhaps a more foreign name to a younger generation, has been sold off, with the majority of the company going to Seattle-based Attachmate and certain other parts being shipped off to a collection of organizations headed up by Microsoft.

The deal goes something like this: Attachmate will pay $2.2 billion (U.S.) or $6.10 cash per share for Novell and will operate its infrastructure software and its SUSE Linux business as two separate entities. Meanwhile, CPTN Holdings, a consortium of technology companies led by Microsoft, will pick up more than 800 patents from Attachmate in exchange for $450 million in cash.

The deal comes after a year of will they or won’t they action for Novell that began in March when investment firm Elliott Associates, which already owns an eight per cent stake in Novell, made an unsolicited $2 billon bid for the software maker. That deal was rejected by Novell for undervaluing the company.  But by May, the company officially put itself on the block, and reports said there were “as many as 20 companies” interesting in picking up Novell. When that failed to happen, things went quiet for a couple of months, until July opened with a round of rumours that VMware would purchase Novell to compete with Red Hat and bolster its cloud management software lineup.

Attachmate, the eventual winner, is best known for making data centre software and software for emulating mainframe terminal sessions on a desktop PC. A blog post by Barron’s reporter Tiernan Ray, who interviewed both Novell chief executive Ron Hovsepian and Attachmate CEO Jaff Hawn, offers some insight into the companies’ rationale for the deal.

“There is a common buyer in the systems management area, the person who makes the purchasing decision for the operating system, who is the person who also decides on what to use for host connectivity [to mainframe systems], etc.,” observed Hovsepian. “We share a lot of the same customers,” as Attachmate’s CEO Jeff Hawn noted as well.

Hovsepian says that SUSE has 80% share of IBM mainframe computers based on the “Z” chip that use Linux, as one example of overlap between the companies’ markets.

Quoted in Computerworld, Rebecca Wettemann, vice president of research at IT analyst firm Nucleus Research says Novell may be “one of those companies where the sum of the parts could be greater than the whole,” and that Attachmate’s challenge is to make that happen.

“Novell has always had some strong technology and great research and development,” Wettemann added. It has been less successful in “getting it from the lab to the desktop.”

The blog goes on to suggest several other motivations and strategies for the deal, including the integration of Novell’s management offerings with those of fellow Attachmate acquisition NetIQ.

The Microsoft connection to the deal is drawing a lot of attention, with Business Insider’s Matt Rosoff saying the deal “helps Microsoft in its decade-long right against open-source operating system Linux in two ways.” Namely:

But Microsoft and Novell already have a history in the Linux arena. Back in 2006 the two companies signed a controversial five-year agreement in the name of cross-platform software compatibility. “This set of agreements will really help bridge the divide between open-source and proprietary source software,” Steve Ballmer said back then.

That deal will be expiring next year, however; what better solution for Microsoft than to buy up a bunch of Novell’s assets instead? More ominously, what better tool to begin making Linux vendors an offer they can’t refuse?

A ZDNet blog by Paula Rooney ponders whether or not the SUSE business may yet be sold again. The entry quotes Ira Cohen, managing director at Signal Hill Updata of New York City, a banker who “has had dealing with Novell in the past” describing the deal as a private-equity deal to purchase Novell, clean it up, package it with Attachmate and NetIQ to either sell it to a larger player or take it public. Cohen suggests that the components of Novell may be more attractive to would-be buyers now that they’re separated.

“The Linux business is up in the air. That piece of Novell’s business could be sold. It’s a possibility,” said Cohen. It’s too early to predict but the private equity backers have deep pockets.”

Whatever fate it may ultimately have, the deal is expected to close during the first quarter of 2011.