For the channel, the new Chromebook Enterprise models, and the addition of the Chromebook OS to Unified Workspace turns their Chromebook business from selling a box to schools into a differentiated enterprise solution. 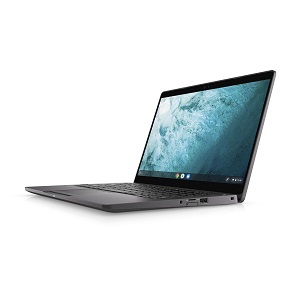 The Latitude 5300 2-in one Chromebook

At VMworld, Dell has made a pair of announcements which expand their relationship with Google in a way that they believe will promote Chromebooks from the classroom into the enterprise.  They have integrated the Chromebook OS into their Unified Workspace platform, providing its capabilities to Chromebooks for the first time. They have also complemented this with the introduction of new Latitude Chromebook Enterprise models designed to have the same scope of functionality as other Latitudes, rather than just the cheap and durable Chromebook option of the past.

Dell introduced the Unified Workspace platform four months ago at Dell Technologies World, looking to reshape end-user computing by integrating VMware Workspace ONE, with Dell devices and services, and with Secureworks. The objective is to enable today’s mobile workforce and its cacophony of operating systems with a platform that simplifies deployment and management for the enterprise.

“Our unified workspace strategy is about what we are doing in a multi-OS world,” said Rahul Tikoo, Vice President & GM, Commercial Mobility Products at Dell. “Our strategy is that we want to be able to simplify the IT lifecycle – simplify the deployment of devices, management, and support. This is what we announced at Dell Technologies World, an integrated IP from Dell, VMware and Secureworks to make that lifecycle journey more modern.”

With deployment, Tikoo said that the objective is to facilitate zero-touch deployment.

“That means being able to provision your PC with your image and software, taking IT out of the equation, aside from the first step of telling them what you want,” he said. “With management, this is all moving to unified endpoint management of the many operating systems in an enterprise. VMware Workspace ONE lets you manage all of these in the simplest manner possible. We also have support with ProSupport, ProDeploy, and ProManage for end users, a managed service to improve IT operations that we also announced at VMworld. Our competitors don’t have these.”

The first part of the VMworld is that the extension of Dell’s relationship with Google has added the Chromebook OS into Unified Workspace.

“We have extended that same philosophy into Chrome, making it zero-touch, and connecting it with unified management, to simplify the arduous journey from the factory to the customer,” Tikoo said. “We have extended Workspace ONE support to Chrome, which can now be used to orchestrate the Google console, and ProSupport and ProSupport Plus are also now available for Chrome, including the predictive and proactive capabilities. In addition, while Chrome is innately secure, we have partnered with Netskope to add their CASB protection.”

While the extension of the broader Unified Workspace management capabilities to Chrome are a major element of this announcement, the other big one is the big uptick in the capabilities of the devices themselves.

“Those enhancements to the Chromebooks themselves are a key part of the story,” Tikoo said. “Traditionally, we have targeted Chromebooks at two markets. One is education, especially K-12, where the low price point and high durability make them ideal student devices, and where the lower performance isn’t an issue. The other is consumers.” 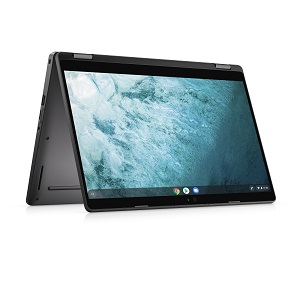 The same Latitude 5300 2-in one Chromebook in tent mode

“The Chromebook Enterprise puts the Chrome OS on enterprise grade Latitudes, with a range of options from Celeron up to Core i7,” Tikoo said. “They have the same options as Latitude. They have the same features as Latitude premium devices, like narrow borders and a small footprint.”  Other features include all-day battery life and fast battery charge with ExpressCharge technology, and global LTE broadband capability.

“This is the first broadband connectivity for the Chromebook,” Tikoo stated. “A  lot of the workforce is mobile. To enable that, it’s not just enough to have small devices. You have to be able to connect from anywhere.

“These are modern commercial devices – not boring. cheap K12 ones,” Tikoo stressed.

This lack of enterprise-grade support has been a gap in the Chromebook portfolio previously.

“In the past, education Chromebooks have been sold into the enterprise,” Tikoo said. “That has been a problem. Today, a lot of enterprises, as they move towards the cloud have begun to look at G Suite as an alternative. Many kids now have been brought up on Google as a default in the schools. Those people in the enterprise suite who are G Suite or G Drive users are the market for this.”

Dell has been doing well against Apple with its regular Latitudes, but Tikoo said that this lets them challenge Apple on another front with a non-Windows device.

“Enterprises have also been looking to alternatives to Macs for years, because they just aren’t enterprise ready,” he noted. “You can’t take your enterprise machines into the Apple Store when they break. These machines go into that space and solve that problem. We know on the Mac side there are some fanbois who will never change, but some will move if we provide them with the right alternative.

“We have been growing share in the PC market on notebooks for several years at the expense of Apple,” Tikoo added. “We would expect some TAM expansion, but its more conversion. We want to take away more of this market.”

For the channel, Tikoo says that the combination of these enterprise-grade machines, and the broader Unified Workspace context fundamentally change and improve the nature of the Chromebook sale.

“The channel sells Chromebooks today, but they are selling a box,” he said. “It’s a very simple sale for K12. These will be enterprise sales, where the channel can sell the entirety of the United Workspace value proposition. It’s not pushing a box.”