Commvault’s new Vice President, Canada, talks with ChannelBuzz about his new role, and affirms his confidence in the Commvault channel in Canada. 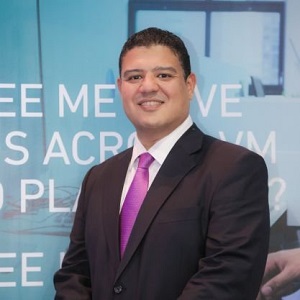 “This is an extremely diverse region, and we took Commvault to the next level in it,” Hemdan told ChannelBuzz. “We did very well and multiplied our business across the region.”

Last year, Hemdan moved to Canada, and with the move from his old region, Commvault created a new role for him as Vice President of World Wide Industry Solutions Group.

“I was assigned to develop and create the foundation of the Industry Solutions Group,” Hemdan said. “It is tasked with looking at what we can we do to help our customers with specific industry-specific requirements around data, as part of digital transformation.”

Commvault has recently made multiple changes to strengthen their go-to-market operation, moving Owen Taraniuk to the global channel chief role a month ago, and following that up by hiring former  Veeam exec Andy Vandeveld to the same Alliances management role he held at Veeam. Hemdan indicated though, that his appointment to the Canadian job is simply a coincidence, and is not related to those broader changes.

“Everything has to be aligned, as far as go-to-market strategy and route to market, and we execute locally, but my being asked to assume the Canadian role was not related to these other changes,” Hemdan said.

Hemdan said that as he takes the helm in Canada, Commvault’s business has done well, meaning that major changes won’t be required.

“We have been very successful in the Canadian market,” he said.  “There are common problems globally, with data having become the centre of focus, making data management costly and something that needs to be managed in a very smart way. The important thing is how you can make your particular route to market successful. Execution is something that we need to be focusing on.”

Hemdan said that in general, Commvault is doing well Canada-wide, with no particular region in need of attention.

“We do need to make sure that our route to market can deliver the same message and same service nation-wide,” he stated. “I will be focusing on our strengths, expanding what we are doing well, and expanding business models that have been successful for Commvault.”

Hemdan emphasized his intention to continue Commvault’s recent focus on strengthening its indirect routes to market.

“The majority of our business comes through channel partners and our strategic alliances,” he said. “We will continue empowering those routes to market to make them even more successful.”

Hemdan thinks that Commvault is well positioned as the very overcrowded data protection market evolves to the changing dynamics of today’s data centres.

“You always have to look ahead in the market to remain a leader,” he said, “There will always be point solutions, but they can create siloes, and siloes always increase OPEX and complexity of environment. We have to be dynamically consistent, and benefit from having a very strong product management team and development team.”