The enhancements to SolarWinds N-central stress similar themes as SolarWinds RMM and Passportal solutions, as SolarWinds MSP continues to harmonize products that came in through multiple acquisitions together with the broader SolarWinds strategy. 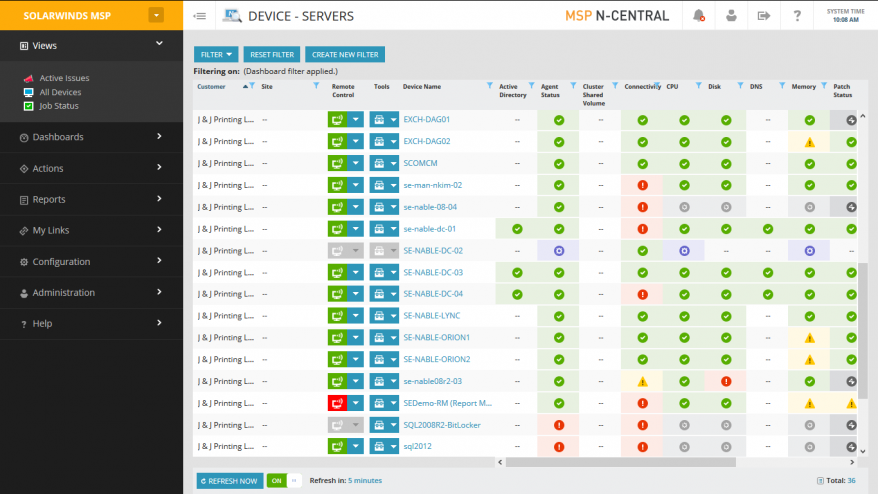 SolarWinds’ new SolarWinds N-central 12.2 adds multiple new features for MSPs, including new Network Topology Mapping, and enhanced automation, encryption  and patch capabilities. The release follows a common theme that cuts through the entire SolarWinds MSP portfolio, particularly around the extension of automation, as well as the deepening of security.

“The thing we tried to do with this release was bring everything together in terms of the breadth of coverage that we provide,” said Mav Turner, VP, Product Management at SolarWinds. “We have added more security, and more automation, each of which are significant in themselves, but together they bring a greater breadth of coverage to the market. We need to automate tasks to scale business efficiently, and with visibility into SaaS being increasingly important, we need to tie that together into a single pane of glass.”

Turner noted that enterprise IT and MSP IT work mostly with the same technology stacks, but that these coverage issues are relatively more important for MSPs.

“The big difference is that for most of the enterprise, IT enables their business,” he said. “For MSPs, it IS the business. That’s a fundamental difference in how you consume and deliver services.”

Network Topology Mapping has been added to the 12.2 release. It greatly reduces the time needed for MSPs to troubleshoot connectivity issues, by providing a direct visual of their customer environments right from their desks, along with the ability to support in-depth network assessment and intuitive visual troubleshooting.

“What we had in N-central 12.2 before was network device monitoring,” Turner said. “The typology is new, showing the relationships, as is how we represent it on the map. That new visualization of the typology is the key addition here.”

The topology mapping is an addition from the SolarWinds side of the house.

“This was part of a SolarWinds-wide initiative, leveraging technology from the core side,” Turner said. “N-central had an old version of mapping, which we were looking to refresh, and do that with one version across the business. This is something that we could have done faster on our own, but we wanted to do it as part of this broader initiative. We want to be able to deliver more feature functionality faster across the whole process, not just in the MSP silo.”

Another addition is Disk Encryption Manager, which comes through SolarWinds’ partnership with endpoint protection vendor SentinelOne.

“SentinelOne and its Endpoint Detection and Response [EDR] technology is a fundamentally different approach to protecting endpoints than anti-virus, and Disk Encryption Manager is linked to their endpoint protection and is an extended feature of it,” Turner said. “The encryption renders information on a device’s disk drive unreadable if it is lost or stolen, and also makes it easy to manage, monitor, and report on the encryption status of the data, at scale.

Automation Manager has also been extended, so that it can now talk to and act on VMware environments, and thus automate VMware software-related workflows and activities.

“With this release, we have extended Automation Manager specifically around VMware,” Turner indicated.  “That’s particularly important for customers who are looking to scale their businesses.”

Patch Manager has been rearchitected, with the Patch Manager engine now being separated from the main N-central engine.

“You need to monitor your own security first, with best practices around things like patch management,” Turner said. “This architectural change separates out patch management faster to get content to market quicker and allow MSPs to respond faster to patches. It will mean more timely patching of third-party applications.”

The enhancements to N-central 12.2 reflect a common strategy across the SolarWinds MSP portfolio. Brian Mackie, Product Manager at SolarWinds, who handles the SolarWinds RMM solution that originally came from LogicNow, emphasized that their roadmap themes are very similar

“We are implementing new UI improvements,” said Brian Mackie, “We gave our dashboards a facelift to get rid of a stale retro look. Making it look fresher helps sales to new MSPs and helps MSPs with sales to their customers. We have also made QoS enhancements, with a range of feature upgrades like patch management.” Mackie emphasized that the new Patch Engine new in place offers improved performance, and much more flexibility in scheduling instead of a one size-fits-all approach.

“The RMM Backup engine is also now much more up to date with Backup agent upgrades,” Mackie added. It is based on SolarWinds Take Control remote management technology.

“We have also improved our Automation Manager tool within RMM. It’s a downloadable app with a customizable interface for PowerShell scripts. We are introducing a module with more VMware out of the box.”

Mackie also noted the significance of new integrations. One with SentinelOne from earlier last year has been popular, and an integration with WatchGuard was announced in October as support for network vendors continues to be extended.

“We have also greatly expanded our support for Macs, to bring them as close as possible to Windows workstation support,” he said.

“We are pleased this came about so quickly,” Mackie noted.

Colin Knox, Passportal’s former CEO, who is now Director of Product Strategy at SolarWinds, responsible for the SolarWinds roadmap, outlined that roadmap and how it correlates with the broader strategy around NCentral and RMM.

“We built the documentation management component of Passportal into both Solarwinds RMM and NCentral by the time the acquisition closed,” Knox said. “Since then, we have been looking for ways to deliver additional ease of use.” At the SolarWinds MSP Empower event in September, Passportal announced an integration with their Take Control remote management.

“With this integration, any tech can log into a remote session and gain access to client machines without having to know a password, whole having it all fully managed,” Knox said.  “I believe this was the first such integration for Take Control, to expand the SolarWinds story of providing more freedom of choice and showing more value.”

“We will see some new strategic advantage features on the password management side of things, and more investment in resale of Password Management as a service,” he said. “We are hearing strong demand for this.”

Look for automation to continue to be a top priority across all the SolarWinds MSP solutions.

“I think automation is still the weakest area in RMM,” said John Pagliuca, Executive Vice President, General Manager MSP, at SolarWinds MSP. “It feels like it has the same kind of perception as AI, where people think it seems cool, but don’t know how to apply it, or don’t know how to get started. We need to make it easier to get started. That’s a nut we are trying to crack. I don’t gain revenue from people using my automation tools, but I do gain healthier tools.”