The new solutions are based on the newly released Microserver Gen10 Plus HPE released in February, which is half the size of its predecessor, with significantly greater performance. 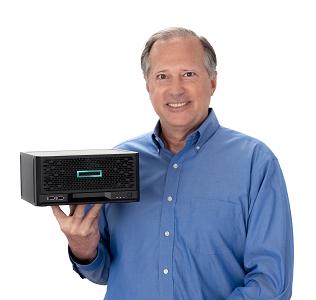 The HPE ProLiant Gen10 Plus MicroServer — definitely not plus-sized

Hewlett Packard Enterprise [HPE) has announced the expansion of their HPE Small Business Solutions Portfolio, with three new offerings around the latest HPE ProLiant Gen10 Plus MicroServer, which the company began to ship last month. The solution uses cases are Office in a Box, Scalable File and Backup and Edge to Cloud.

“The HPE ProLiant Gen10 Plus MicroServer is a brand new microserver that delivers on all the needs of these use cases,” said Robert Checketts, Senior Manager for Product Marketing at HPE. “We call it ‘small but mighty.’ It is basically the size of a hardcover book – 10 inches by 4 and a half inches. That’s half the size of the previous generation.”

Checketts stressed that the smaller size makes the microserver well-suited to typical small businesses as well as remote office locations where space is typically as a premium.

“Small businesses can have very small locations too,” he said. “This goes on a bookshelf.”

The smaller size comes from separating the power supply from the server, which reduces cooling requirements, and cuts fan noise to 36 decibels.

“Moving the power supply outside of the server means that so it only has a single fan, down from two before,” Checketts indicated. “It’s incredibly quiet, and could run in a library.”

Up to 32 GB  of RAM and 16 TB of storage can go in the server, and there is a processor choice of the Intel Xeon E-2200 Series or the 9th Gen Pentium Gold.

“Even the Pentiums have double the performance of their predecessor,” Checketts said.

He said that analysts were extremely excited about this, and that on Tuesday, they had briefed 22 customers in the Spiceworks community.

“There is a lot of excitement there,” he stated.

Several feature functionality elements which have been available on larger HPE platforms are now available on the microserver.

“We have simplified and automated the rapid setup process so that it is no more complex than setting up a mobile phone,” Checketts said. “This was not previously available on this platform, but it is now. HPE Integrated Lights Out 5 [iLO5] also wasn’t available on the previous version of this server.” The optional ILO enablement kit customers configure, monitor, and update servers seamlessly, no matter where they are. HPE InfoSight for Servers, a cloud-based AI management tool that uses predictive analytics to anticipate and prevent problems, is also being offered on the HPE microserver for the first time.

“The ILO remote monitoring and management is particularly important from a channel perspective,” Checketts indicated. “Partners can install this in many small businesses because they can partition the RMM and mange multiple locations remotely without having to go out to the customer and work on them.”

Checketts indicated that partners are able to use HPE Financial Services to offer customers 24 to 48 month terms on these server offerings, with refresh and return options. That’s not new, but he said that at the small business level, it’s not that well known.

“Partners selling with HPE Financial Services get paid on the full value up front,” he said. “A lot of channel partners had no idea they could offer financing solutions to these smaller customers, as well as get paid up front. This is well understood with larger customers, but in smaller business environments, it’s not as well known.”

Megan Zeigler, manager, worldwide SMB and mid-market solutions and services team at HPE, outlined the three use cases where HPE is positioning their microserver solutions. All are sold exclusively through channel partners – standard practise for this HPE Small Business Solutions portfolio since it was first introduced in October 2018.

“The Office in a Box solution is aimed at small office deployments with 1-10 users or 20 devices,” she said. “The Aruba Instant on access points allow them to be set up on a mobile app.” It also has an HPE RDX removable disk system for simple local backup.

The Scalable File and Backup use case is scalable up to 16 TB of storage, with up to 4 4 TB attached storage devices. The Edge to Cloud use case makes use of that optional ILO enablement kit. Cloud-based services are also supported by Microsoft Azure.