Hollywood stunt doubles and a data therapy dog were part of the core messaging Commvault delivered to partners at the start of their GO event Monday: that partners can trust Commvault to deliver peace of mind to customers and increased simplicity and predictability in their business with the company. 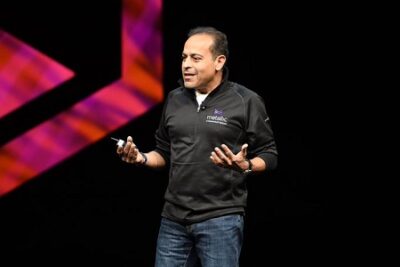 DENVER – Commvault’s new CEO Sanjay Mirchandani made his first keynote appearance at the company’s Commvault GO event, at the end of the Partner Xchange here on Monday. Mirchandani was the cherry on top on this day, however, appearing at the very end of the event. The large majority of it was dedicated to emphasizing, through multiple different approaches, how the company hopes to grow its channel business further by deepening mutual trust with its partners. The message was delivered to approximately 500 partners at the company’s second Partner Xchange day at the GO event.

“A good partner program is really about trust,” Carmen Sorice III, Commvault’s Go-To-Market Chief of Staff, emphasized in kicking off the event. “We said we would put new financial incentives in place with a new and enhanced partner program, and we did that on July 15. It included new customer rebates to bring in new logos, a new end of year quota attainment rebate and enhanced Business Development Funds. There were three things we heard from you, and we did it in a way that’s predictable, as they are in place for the full program year.”

Sorice said that partners continue to be able to trust Commvault to deliver market-leading products. He pointed to two analyst reports for the sector where the company had top placements, one in the most recent Forrester Wave, and the other in a brand new Gartner Magic quadrant.

Sorice also emphasized that partners could continue to expect Commvault to deliver innovation. He highlighted Metallic, a newly announced Commvault SaaS portfolio that will be operated as a division of Commvault, and will be available initially in the U.S.

“Customers want choice in how a solution is delivered,” he stressed.

To press home the trust theme, Sorice then hosted a panel of two professional Bobby Holland Hanton – Liam Hemsworth’s regular stunt double – and Chloe Bruce. The parallel was implicit between the collaboration and trust required in safely doing professional stunt work in films, and the collaboration and trust needed between Commvault and its partners to successfully sell enterprise data protection solutions.

With no new channel program news because of the commitment to predictability for the rest of the fiscal year, the new news for partners specifically fell into two buckets: new channel execs, and new marketing initiatives.

Commvault’s channel leadership over the last year and a half has seen a lot of churn, even by the standards of channel sales leadership generally, which tends to be characterized by a high degree of executive mobility. The latest change sees Mercer Rowe enter as vice president, global channels and alliances, replacing  Owen Taraniuk, who left the company earlier this year. Rowe spent approximately seven years each at Arkivio, an enterprise storage software vendor acquired by Rocket Software in 2008, and VMware,  where he ended his tenure there as CEO of VMware and SoftBank’s joint venture in Japan. He then had shorter stints at IBM, as VP of Strategic Partners for Cloud, and then Watson, and at Avaya, where he was brought in to build out their cloud strategy. Until his move to Commvault, he spent this year as the VP of Business Development at file storage startup Qumulo.

“Edison will be an advisor for Mercer and our Go-to-Market team,” Sorice said.

Chris Powell, Commvault’s CMO, then took the stage to discuss Commvault’s new marketing changes, following up their appointment of a new CEO earlier this year with a new logo and a new brand identity.

“We are defining who we are as an organization,” he said. “You have to have the right story. People have to be able to find you. Then you have to work collaboratively to drive demand.”

To define the right story, Powell said that in the early part of this year, Commvault began the long process of talking to partners, customers, and analysts about what people rely on Commvault for. That came down, he said, to peace of mind.

“In the data business, customers want peace of mind,” he emphasized. “That comes down to data readiness. You prepare by making sure you are data ready. That’s what Commvault is standing for. The future belongs to the data-ready. This will permeate everything we are doing.”

This includes a new purplish logo designed to make the company stand out in what Powell called a ‘sea of sameness’ of blue-green hues, and a new marketing commercial where an IT guy turns out to be relating his problems to a data therapy dog. The theme is that while there is no data therapy dog to provide peace of mind, there is Commvault.

“There wasn’t complete agreement about the data therapy dog campaign when that was first pitched,” Powell noted.

For the second theme, how customers can find Commvault, Powell outlined changes to the company’s digital strategy.

“The more digital we can get, the more we can spread awareness,” he said. “A new website with a new architecture was launched two weeks ago, to drive demand as opposed to just being informative, like our last website.”

“There is a knife fight in this market,” he said. “We are shifting investments to this.”

High priorities are also being assigned to social media, peer review sites, which are becoming increasingly important in buying decisions, and to building more customer references, which are more formalized versions of the same thing. Content syndication with partners is another area of emphasis.

To drive demand, Powell emphasized that while about 3000 of the large companies Commvault targets are looking at different web sites for data protection than the ones they have, 2000 of them are not looking at Commvault.

“That’s what we have to change,” he stressed. We have to be in more rooms. We have to do that with our partners.”

Better technical and sales enablement is critical to this, and Sandy Hamilton, new to Commvault as VP for Customer Success, is driving this enablement.

“We want to ensure that you feel ready from a sales and technical perspective, and have done a number of things in the enablement organization to strengthen this, bringing together a number of disparate organizations across Commvault,” she told partners.

“In addition to our existing certification programs, we have launched new bootcamps for partners for both sales and technical teams. We have also introduced new partner blogs and eBook series which empower you to sell and be relevant. Partner Impact kits help you be ready to tell your story.

“We have also built new sales guides around service packs,” Hamilton added. “These service pack guides highlight key features and functions. In the past, this  was a complex set of documentation. We are distilling it down to what’s most important for you and your customers.”

Hamilton also highlighted the Partner Success Desk, which was launched at the last GO event a year ago.

“We have done hundreds of demos and POCs through the Desk, and we want to make that thousands,” she said. “The feedback is that it helps you get technical wins.”

“This is the new Commvault,” Mirchandani  said. “A product company that isn’t innovating is done. He noted that the flagship Commvault Compete offering is being updated every 90 days, and said that Commvault Activate, launched at last year’s GO as a ‘know your data’ solution for compliance, has been reworked.

“Activate gives you access to user data without even having to have Commvault backup,” he stated. “It has been reimagined, rebuilt and relaunched.”

Mirchandani also emphasized the importance of burying Commvault’s reputation of being too hard to work with both as a product, and as a company.

“We are leaving no stone unturned to make it easier to do business with us,” he said. “We are debunking the myth that our product is hard to use. We can skin our interfaces any way you want.”

Simplicity in product and in doing business with Commvault are key to growth going forward, he emphasized.