The key technology piece here is BetterCloud adding the ability to set policies for alerts without the need for triggers. The new offering is also important, however, as a public reaffirmation of their relationship with Google. 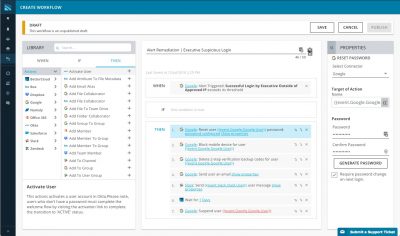 New York City-based BetterCloud started out in life in 2011 as a Google-based SaaS platform for the management and security of Google G Suite. In 2015, they rearchitected the platform from a single vendor focus to a multi-vendor capability. They still maintain a close strategic relationship with Google however, and today are launching Activity-Based Alerts for Google, a real-time monitoring and reporting solution for G Suite applications.

“We are still a multi-app SaaS vendor, but G Suite is used by four million of our customers – more than any other SaaS application that we work with,” said Shreyas Sadalgi, BetterCloud’s Chief Business Strategy Officer. “It is typically the first application that companies start with on our platform. We have also released Activity-Based Alerts for Okta and for DropBox, so this is not the first time we have done this for a single vendor. However, the Google Alerts took us a longer time to develop. It is a complex technology to work with, and we are dealing with it on a massive scale. We track and manage five billion data objects off Google, and we have to be able to track real time activity against that. With the other apps, the scale is not as big.”

The ability to do real-time Activity-Based Alerts is the key addition here, and represents a technological advance in BetterCloud’s upcoming core platform.

“We have always done alerts, but all the activities were static triggers,” Sadalgi explained. “If, for example, you made a G Drive file and shared it publicly, then changed it to change it privately, those are static definitions. It has to be one or the other. So if the definition changed, we could track that and issue an alert based on that.”

Now with the real-time alert capability, the user is able to monitor and track in real time, without the need for a trigger to take place, with highly customizable monitoring and alerting policies

“It works across all of the many G Suite applications, and gives enterprises the ability to monitor any events, such as suspicious logins, sign-ins from suspicious locations, or malicious behavior,” Sadalgi said. If any unauthorized user downloads or even views a file, IT is immediately alerted for quick remediation. Policies can be set up revoke to sharing settings on the document as required.

“This is particularly important in case of a breach caused by users sharing files accidentally,” Sadalgi added. “You can tell with this if a document exposed by the breach was viewed by nobody, or if it was viewed by many people.”

“We had strong feedback from our BetterCloud Altitude event in October 2017, that this need for Activity-Based Alerts was their number one priority,” Sadalgi said. “It makes it much easier to sell G Suite and BetterCloud as a package.”

This strategic nature of the partnership Google is another thing that BetterCloud is emphasizing with this release – which includes the public acknowledgement, for the first time, that the BetterCloud platform is built on the Google Cloud platform.

“This is a major expansion of our seven year partnership with Google,” Sadalgi emphasized. “It’s important because of the scale aspect. We have been a Google Premier Technology partner for these seven years, and we have a special relationship with them. We have to work closely with the Google partner engineering teams, and we work with their sales teams to sell BetterCloud. That is why we are now emphasizing that we are built on the Google platform – built on Google for Google. Google also incents their sales teams to introduce BetterCloud to a customer. That’s a key element of the partnership.”

BetterCloud is a velocity sponsor of Google Next 2018, which takes place next week, and will be showcasing Activity-Based Alerts for Google at the event at booth #S1329.