AWS made such a flurry of announcements at last week’s re:Invent event that it was sometimes difficult to keep track. Canadian partners and customers at the event did, however, have pretty clear ideas about what they liked. 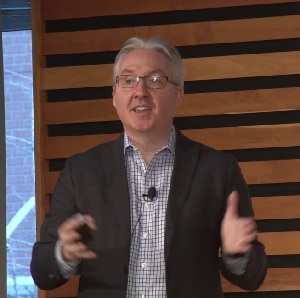 Canada has a well-deserved reputation for being somewhat of a laggard in the cloud compared to the U.S. However, both partners and customers in Canada saw a lot in the new services that were announced at last week’s re:Invent event that will be highly useful now, and others that will help create an inexorable momentum in areas like machine learning and the Internet of Things.

Eric Gales , country manager for AWS Canada, said that he continues to be surprised at the rate of innovation that keeps coming out of AWS.

Gales also said that AWS Fargate, a new service which makes running containers easier by managing the underlying infrastructure, is popular in Canada.

“Fargate is being viewed as a leap ahead,” he said. “It’s fascinating to see these new services come to the fore.”

AWS made multiple announcements around machine learning at re:Invent, and  Gales said that this is resonating in Canada:

“One of the really exciting areas right now in Canada is AI and machine learning,” he stated. “There are lots of new companies standing up around that. It’s a relatively new technology and we are doing more to make it accessible, so Canadian companies will have the opportunity to take advantage of that. It’s a hot area for us.”

ChannelBuzz spoke with many AWS partners and customers at the event to gauge their feedback, and the response was overwhelmingly [although not exclusively] positive. Jarrod Levitan, Cofounder and CEO of Vancouver-based systems integrator TriNimbus, which remains AWS’ only Premier partner in Canada, liked both the quantity and quality of the new services.

“I don’t know how they will continue to maintain the pace of the innovation, but it is coming at a really exciting pace,” he said.

While AWS heralded both the existing ECS and the new EKS as complementary services, Levitan said the reality is likely to be rather different – but that that’s a good thing, not a bad one.

“They aren’t afraid to kill their own services,” he said. “ECS was a bit of a shambles when it came out. It was 80 per cent of what it needed to be. So developers increasingly went to Kubernetes and wanted to run it on AWS.  EKS will compete with ECS, but it will be a stronger service.”

Rene Heroux, Chief Technology Officer at national solution provider Scalar Decisions, agreed that this was a wise move, because Kubernetes is the future for containers.

“I think the writing is on the wall,” Heroux said. “Even Docker Enterprise Edition now supports Kubernetes. They are all aligning behind that.”

Mike LeBlanc, CEO  of Fredericton NB-based integrator partner Blue Spurs, said that the challenge of digesting all this information is especially strong in Atlantic Canada.

“We are a born-in-the-cloud company, helping companies build cloud native solutions, but while the pace at which Canada is adopting cloud is behind the U.S., in Atlantic Canada, it’s behind the rest of Canada,” he said.

LeBlanc also thought that the new services around machine learning will be critical in developing this market.

“Bringing machine learning to the masses through these services will enable so much,” he said. “We try to demystify this for customers. They know it from movies, but it’s real now. There will be so much activity now that it will be easy to show customers value.”

The new machine learning offerings include DeepLens, a high-definition camera optimized for machine learning, Amazon Transcribe, which converts speech from audio files stored in Amazon S3 into accurate, fully punctuated text, and Amazon Translate, which provides highly accurate translation of text from one language to another.

“Companies that provide these kinds of services for a living and will be wiped out,” Levitan said. “We have seen attempts to do them by others before — but not as a platform offered to the world where any guy in a garage in Brazil can program against it.”

This kind of disruption cuts across many of the announcements. For example, the new Alexa for Business offering partners with today’s office technology giants, but longer term, is very much a threat to their existence.

“AWS is not afraid to destroy their technology partners, but because they are the 800 lb gorilla, these companies have to play with them,” Heroux said.

Levitan pointed out that innovation benefits as a result.

“The technology partners are motivated to stay ahead of Amazon to prevent their being displaced by them,” he said.

Multiple announcements were also made around Internet of Things services, which also pleased the partners.

“Internet of Things is extremely important for us,” Heroux said. “AWS has commodified machine learning and are trying to do the same with IoT, by making it easier and easier for people to use. If our forest, and oil and gas clients can see a saving from this, they will look at it.”

AWS customers were excited by all the news. Keith Cerny, CTO for at Vancouver-based GRC software provider ACL, whose cloud-based solution is built in the AWS cloud, was impressed by the breadth of the enhancements.

“There were a lot of advancements around databases, including Aurora, but also EKS and container improvements,” he said.  “Our customers need a number of different solutions around data analytics, so we want to make what AWS provides more accessible, passing on those benefits with our own secret sauce. Anything to do with security and compliance catches our attention.”

‎Alan Zych, Manager, Mobile and Web Applications at the Mississauga-based Flynn Group, was also impressed by the Aurora announcements. Flynn is a very large building envelope subcontractor, and uses the AWS cloud internally, rather than resell it.

“Our mobile and web applications are designed to reduce costs, leveraging the data we collect on site,” he said. “We use them for cheap storage and cheap compute and get back faster to customers with a quote. We also make innovative use of the technology, such as tabulating data on current weather conditions, which can be critical in things like roof installations, and allow us to cancel out for union rule reasons relating to safety. The pace of the announcements around Aurora is great because databases are really expensive. This is clearly where the market is going, and we are looking to swap more of our stuff into Aurora.”

“What really excited me is how the machine learning and AI enhancements are structuring the data we have in OLAP, and how we can use it to provide insights and foresight,” he said.  “The announcements provided a new benchmark to use services.”

“We are now at a size globally where we evaluate all services but there is something to be said about AWS offering this kind of security service.”

Hamed Ettefagh, Infrastructure Manager at BCAA, indicated that the auto service club began its transition to the cloud 18 months ago. They have critical goals around business continuity and DR, because of the statistically higher chance of earthquakes in B.C.

“We want to be able to spin up to serve customers with the least amount of human interaction possible,” he said. AWS announced at the event that EC2 now allows peering relationships to be established between Virtual Private Clouds (VPCs) across different AWS regions, and Ettefagh said that VPC peering is important for them.

“We have to do packet inspections, so we have had to license Palo Alto,” he said. “A lot of our data still resides on-prem, and still needs connectivity, which we can do with VPCs.”

While both partners and customers liked the new services, they pointed out that the way that they are delivered could stand to be improved.

“These services are exciting but they have to be available in all regions and in GovCloud,” said ACL’s Cerny, who noted that it’s common for services to vary in different regions and that GovCloud in particular has tended to lag. “We don’t want to get into place a where we can’t use services across all the regions where we operate. So I love what I have heard about an internal mandate to have parity across all regions and GovDoc. They are not there today. But in an ideal world, everything would be available everywhere immediately.”

“I’d rather them not announce things at all if its not in our region, like AWS Inspector [security assessment service] which was just in one region,” said Vena’s Papayiannis. “We don’t want that.”

The customers were also vocal about an issue that was more about strategy than technology – the lines of demarcation between AWS and their solution provider partners.

“We need more clarity around the partner model,” Cerny said. “What is it that we should go to AWS for and what do we go to partners for. I don’t have a clear understanding for that. We see good intent, but as an end customer, we don’t know when to reach out for TriNimbus and when to go direct.

“I totally second that,” said the Flynn Group’s Zech. “When it comes to talking with the partner versus AWS, we don’t know what to do.”