Dell Technologies’ CEO took questions on a myriad of topics, ranging from the wisdom of doubling down on PCs when the segment is in decline, to why a traditional hardware company believes it to be well positioned for the cloud era. 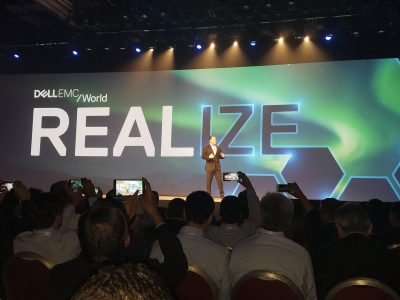 LAS VEGAS – At the Dell EMC event here, company CEO Michael Dell appeared at multiple venues where he imparted information and answered questions about the company’s vision heading forward, and how it is positioning itself to deal with today’s opportunities and pitfalls.

He stressed that the company is committed to innovation and risk – as he said all companies must be.

“Technology is not just an IT function any more, where the idea is “let’s have some tools,” Dell said. “You really can’t do anything very well any more without technology. Businesses of all sizes have to figure out how to best leverage these tools. If you are a small business, you can invent or reinvent a business using technology.

“If you aren’t thinking about how your supply chain works, and other companies in your value chain, you are doing it wrong,” Dell said. “You have to embrace risk. It goes along with innovation hand in hand. Too many people have been afraid to fail, and have accessed less of their potential than they could have as a result.”

A willingness to embrace going digital is also critical.

“Digital transformation is your ticket to the dance of continuous innovation,” he told customers in his general session keynote.

Dell thinks that negativity about the continued ability of the industry to overcome what used to be seen as immutable laws of physics is misplaced.

“We have continued to see tremendous improvements in CPU and complex memory,” he said. “Processor technology will continue to improve. No one knows how they will get past the barriers, but there always have been such improvements in the past, and I believe that will continue. Our job is to understand where those innovations are, what our customers are trying to do and how we can best respond to that.”

Dell also stressed that even in a time when all types of PC shipments have been flat or declining for an extended period, enormous opportunities still remains which warrant Dell’s heavy investments in the space.

“A computer isn’t just a thing you carry around with you,” he said. “The number is just exploding, and is taking many forms. ARM for instance, has licensed 100 billion cores. The cost of making something intelligent is approximating zero dollars, which means there will be a lot more of them.

“The parent of the Internet of Things is PCs,” Dell added. “We are learning a lot about that from all the work we have done in the client business.”

Dell also suggested that even in conventional PC environments, there is lots positive in Dell’s performance.

“Our average selling price has been going up, not down, and our average revenues have been going up, not down,” he said. “We have had 17 continuing quarters of gaining share – and have an 18th coming. We aren’t number one in units but the units we sell are more valuable than the other guys. Clearly there’s a market consolidation going on, but that gives us incredible scale.”

Dell said that a rethinking of what kind of work tools generate the most productivity has led to prices refusing to follow shipments in decline.

“It does not make sense to give the people in your organization the cheapest, lowest-cost computer,” he said. “You need to give them great tools to inspire their productivity. It’s why the average selling price is going up not down. Having said that, there is a market consolidation going on, and we are continuing to gain share.”

Dell also stressed that Dell is well positioned in the cloud world, and that there has been a retreat from reliance on the public cloud.

“About 80 per cent of Pivotal clouds run on-prem,” he said. “Many customers will do their testing in a public cloud, and then, for reasons of cost or security, move to an on-prem solution.”