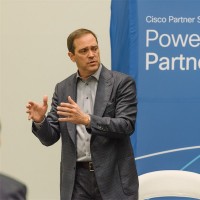 SAN DIEGO — Chuck Robbins’ ascension to CEO of Cisco was perhaps all the more interesting to the company channel partners than the average key CEO appointment because of Robbins’ own personal background, which includes a long run in the company’s channel organization. And that background, Robbins says, is serving him well in his new role.

“For me, [to be CEO of Cisco] you have to understand the economics of partnership and relationships deeply. You have to understand building that into your model,” Robbins said. “You can’t get caught up in a short-term desire or opportunity that would reduce your profitability profile with partners, or be inconsistent.”

That latter point, Robbin suggests, is probably his biggest takeaway from his time in the channel organization that informs what he does as CEO. He has a deep sense that not only are the company’s partners important, but they’ll stick with the company, as long as the company does right by them.

“Partners can handle most anything They can deal with most anything if you tell them clearly and openly, if you’re consistent, and if you have a value profile for them at the end of it.”

At Partner Summit, the big change Robbins was asking for was speed. He stressed to partners that “faster, faster, faster” was his mantra. Of course, any CEO wants the sales to come pouring in faster. But the ask here goes well beyond selling more Cisco solutions. The request is that partners speed up their own transformation in the face of what Cisco sees as a huge opportunity as more and more companies become — or would benefit from becoming — digital enterprises.

“You have to spend more time understanding the value of technology in the business versus how you thought about it in the past,” Robbins said. “It’s less about fulfilling demand, and more about creating demand.”

Creating demand, though, can be a challenge for solution providers, especially in an area as undefined and all-consuming as the digital transformation of business. Encompassing broad swaths from data and analytics to cloud and collaboration, to the Internet of Things, it’s easy for partners to feel the opportunity has the potential to have them riding madly off in all directions at once. To combat that, and to help customers get a better feel for just what the vision is across the board, Robbins said Cisco has to get better at telling the end-to-end story of the digital business and the digital world, what it means from the connected car to the enterprise data centre and the many interaction points in between.

“I don’t think most people really understand how it all works — the broader architecture, the broader vision where this all comes together, how it’s all connected,” he said.

“That’s one of my priorities for November,” he added, providing a very substantial hint at what’s going to be at the top of the agenda for the company’s second Partner Summit 2016, slated for November in San Francisco. That direction comes, in part, from what Robbins said he heard from partners as problems with knowing where to prioritize, and absorbing the broad messages and array of announcements made at an event like this year’s (first) Partner Summit. “We inundated the partner community,” Robbins admits of this year’s event.

That’s a challenge, but it also reflects a nice change from the early years of Partner Summit and Robbins’ days in the channel organization. In the past, the executive reminisces, the company had to pull strings to get product launches attached to Partner Summit just to get key executives to agree to attend.

“Now, every business unit wants to launch here,” he said. “We’ve got executives from every unit coming here, and we’ve even got board members coming out.”

A long way from a decade ago when “we had to beg executives to come here.”

Another significant change in the face of Partner Summit since then is volume — not just in the number of faces in the room, but the number of types of organizations they represent. Increasingly, Cisco speaks of its partner community in terms of an ecosystem, one that includes traditional VARs and other clear IT solution providers, but also includes a broad swath of other organizations from construction giants to software developers. And that’s another place where things are going to go faster, by the sounds of it. Many of these efforts have been in place for some time, but many times “we were ahead of when these things go to scale,” making it hard to get traction.

“We’ve been trying to build out the partnership with healthcare and manufacturing players, but the mutual value proposition was never rich enough,” he said. “Now, both sides are realizing it. And it’s the same with developers. We wanted them, for example, to build in-memory applications on top of UCS. But there just wasn’t enough there to get them excited. Now, the value propositions for them are much stronger.”