With major changes on the horizon, Michael Kerr stresses that EMC partners need to be able to articulate the business outcomes of the increasing complex technology available to them. 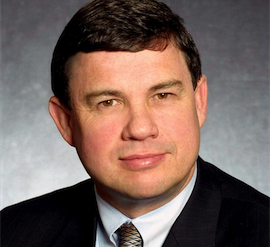 EMC faces great uncertainty in 2016 on account of the looming acquisition by Dell. But Michael Kerr, EMC Canada’s channel chief, said the task for channel partners will be the same in any scenario. Partners need to better articulate the business value of EMC solutions, particularly with reference to newer technology that customers need to have explained.

“Our average partner in Canada works with 60 vendors, if you include everything in their portfolio,” he said. “If we can get them to better articulate the business value of EMC, we will do better, and this is something where we will only get stronger as time goes on and the portfolio expands.”

As EMC has been evolving from a storage company to a cloud infrastructure company, partner command of cloud options has become of critical importance. Early this year, Kerr said that partners needed to do a better job at becoming knowledgeable about hybrid cloud in order to properly discuss customers’ business issues – a requirement he said has been largely satisfied.

“It has met our expectations, and we are meeting the expectations of the market around hybrid cloud,” he stated. “The need for hybrid cloud and the market for public cloud has vastly accelerated in Canada. A year ago, we thought it was still pretty much nascent, but for enterprise clients, it has become front and centre. Security has become critical there. The acquisition of Virtustream [which became the foundation of EMC’s managed cloud services business] has also helped us.”

Kerr said their messaging to partners this year has been that they have to keep pace with the transition to the private cloud environment.

“Partners need to be able to help clients understand the need to transform in tandem,” he said. “Customer options for different applications basically fall into three buckets. Some want to buy capacity and enhance environment they already have – basically the standard, traditional model. Some want to put everything into cloud and shut down their own IT. And then in the middle, you have the hybrid, for where none of the other two options are adequate. Partners have to be able to determine which applications are best to go cloud, which are best to keep as legacy, and which can shift over time – and advise customers about it.”

Kerr acknowledged the problem here is that it’s a lot easier to talk about these things generally than it is to translate them into concrete recommendations for customers.

“These are difficult concepts to sell,” he said. “It’s hard to learn the categories, and the technology involved is not trivial, particularly when you get into issues of transferring the stack from the public to the private. There is still more education of partners that is required on our part.”

“Everyone has heard of cloud now, but not everyone knows what it fully means, in the same way that people didn’t really understand what distributed computing would do,” he said. “Whether a partner likes the change or not, because of the need to restructure their business, doesn’t matter. The cloud is inexorable. The question is how to take advantage of it. Many partners in Canada are still trying to figure out their role and what type of cloud they should advise clients to move towards.”

This problem is especially acute when it comes to revolutionary concepts like data lakes. The original data lake concept EMC announced earlier this year created a vast pool for unstructured data that would be available at the core data centre by leveraging the scalability of EMC Isilon with the capabilities of other EMC Federation solutions. What the company called ‘Data Lake 2.0.,’ introduced last month, shifts the concept to also make the data available at data center edge locations such as remote offices, as well as archived in the cloud.

“Data Lake 2.0 makes it easier and more understandable how you would use data that’s out in the cloud, but most partners are still capable of understanding it because our Canadian partners are still behind the U.S. in data lakes. There will come a time when many – perhaps most – businesses will have a data lake to mine all the data they have ever created. The impetus how to get there from where we are now is still not well understood by most partners however, let alone by customers.”

Kerr also said that partners need to be able to grasp where EMC is going with data analytics to be able to translate it into business outcomes for customers.

“It’s one thing to buy an analytics program, but the trick is to make legacy data available to it,” he said. “We are starting to introduce technologies with built in Hadoop capability like Isilon, so we can do data analytics for the customer if and when they are ready at no additional cost. We are seeing the first sales of Splunk on Isilon, which has the scalability to let Splunk do a good job of analysis. The feeds and speeds here are important, but only to degree that they assist the business outcome. We have to be more skilled as a company in selling the business outcome, being able to take all our product sets and explain in a way that business outcomes makes sense.”

That strategy is applicable even with more familiar technology like flash storage, Kerr said.

“Most customers don’t care about the dialogue about flash becoming dominant, that the price has come down to the point where it will replace spinning disks. If I can show how it will improve database applications, it’s of more interest to them. We still have to compete on feeds and speeds, but it’s not as relevant as being able to articulate business value. Those are the changes we are trying to make in our partner program, as well as things that will increase profitability and predictability.”