Acer Chromebase DC221HQ series, which is coming to market in Canada through Acer’s commercial channel, has both touch and non-touch display options. 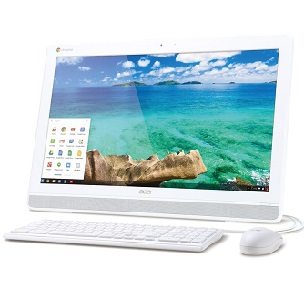 Acer has announced that its Acer Chromebase DC221HQ series, which features both touch and non-touch display models is now available in Canada. The initial Canadian rollout will be solely through Acer’s commercial channel.

“The Chromebase is our All-in-One line, which complements our Chromebox desktops and Chromebooks,” said Michael O’Beirne, senior director at Acer America. “The touch version is an industry first for a Chrome All-in-One.”

Acer, which partnered with Google very early in the Chrome technology’s existence, has leveraged that into market share leadership in Chromebooks. While the Chromebooks still constitute the large majority of Chrome products sold, O’Beirne said that this is slowly changing.

“In watching our customer base, the Chromebooks was where all the attention was originally focused,” he said. “But once they got past the pricing of the Chromebooks that originally attracted them, they began to look at the low-hassle benefits of using the Chrome OS and look for other Chrome platforms – like Chromebox and Chromebase. When you add them all up, we now have over 20 different Chrome devices in the Canadian marketplace.”

O’Beirne said that the Chromebase products, being aimed at the commercial market rather than the consumer, are focused more on offering TCO (total cost of ownership) value rather than simply a low price.

“We have a broad range of products, and certainly the consumer retail and commercial are two different markets,” he said. “Retail is much more about pricing, and we are competitive there. But the commercial market is much more about TCO and ROI. Because we truly understand the Chrome marketplace and ecosystem, and design these products for customer needs three years from now, we don’t treat them as a throwaway. So with these, we are not always the least expensive model but we believe we are the best TCO.”

The Chromebase has an NVIDIA Tegra K1 quad-core processor which by Chromebook standards packs a lot of power for multi-tasking, even when running heavy workloads

“The Tegra is also optimized for graphics performance, which does come into play with Chrome products typically when you are playing videos, or scrolling, because it adds to the smoothness of the experience,” O’Beirne said.

Both models have a 21.5-inch 1080p Full HD display, which outside of the ability to marry a Chromebox to any external monitor, is the largest display that Acer provides with a Chrome product.

“It’s a nice display with a lot of flexibility for wide angle viewing because it has wide viewing angles up to 178 degrees,” O’Beirne said.

These AIOs both have 4GB of DDR3 1600Mhz memory, NVIDIA Kepler graphics, a built-in HD webcam, two 3W audio speakers, and 100 GB of Google Drive storage. They also have a tiltable stand which is adjustable from 15 to 75 degrees and an optional VESA-compatible stand, so they can be mounted in public areas like kiosks.

Kiosks are one of the target market for the Chromebase products, which are aimed at other use cases beyond the education market that has accounted for the bulk of Chrome sales.

“Education has been the primary market segment that has adopted chrome, but we have started to see interest growing outside there, in call centres, point of sale systems, kiosks, and digital signage on the commercial side,” O’Beirne said.