The big and beefy get bigger and beefier as HP updates its workstations to include the latest Haswell processors, greater RAM and storage density. 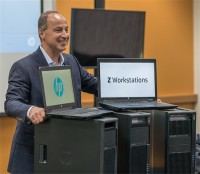 HP has announced an “evolutionary” upgrade of its workstation lineup, moving its high-end machines to the Haswell processors formally introduced this morning at Intel’s Intel Developer Forum and introducing some additional functionality for its workhorses.

The new lineup, which includes refreshes for much of its desktop and mobile workstation lineup, is focused around “three simple goals,” according to Jim Zafarana, vice president and general manager of HP’s commercial solutions unit unit. On the desktop side, Zafarana said the company continues to “feed the beast” when it comes to performance, and on the mobile side, it’s about finding the balance between performance and the “thin and light” factor.

“We’ve never had a better offer. The portfolio of products, displays, and solutions is unrivaled,” Zafarana said at a press briefing last week at the company’s Fort Collin, Colorado-based workstations headquarters.

The Z400 is the company’s biggest seller – and with HP claiming strong market share leadership in workstations, the market’s biggest seller, and Travis Humphries, worldwide product manager for Z Performance Platforms at HP, said it’s also the workstation that most frequently finds itself into embedded applications like CAT scan machines and other job-specific roles. Along with a new Haswell processor, the Z440 gets an updated industrial design, incorporating the front and back handles that have proven a big differentiator on its bigger siblings into its mid-range product. The Z440 also adds support for 128 GB of memory into a new chassis that is “just the right size” for key markets served by the product, Humphries said.

The upper mid-range Z600 family gets the Haswell bump and moves to 256 GB of supported memory with the Z640, and is a big seller in the financial services market due to its small size, quite running nature, and support for up to six displays. “It’s a very premium experience of the Z DNA for a wide range of customers,” Humphries said. “It’s all the latest and greatest workstation technologies in a very quiet, elegant form factor.”

At the top of the line, the Z840 adds support for 160W processors and greater density of RAM and storage, with support for 1 TB of system memory (moving to 2 TB when 128 GB DIMMs become available) and up to eight internal 2.5” drive internal bays.

Across the board, with this generation of desktop workstations, HP decided to dump the aging Firewire connectivity standard, offering support for Thunderbolt 2 instead, although those with legacy applications requiring Firewire peripheral will still be able to add it via a third-party PCI card.

On the mobile side, the ZBook 15 and 17 have been updated to include Haswell processors and Thunderbolt 2, as well as introducing support for the Z Turbo Drive PCI flash storage introduced for desktops earlier this year. In total, the 15 can now sport 2.2 TB of storage, or 3.2 TB on the 17.

Zafarana added that as always, the mobile/desktop decision is usually one dictated by the user’s role.

“If you’re a 9-1-1 call centre, you’re fixed, you don’t need mobile. If you’re a Wall Street trader with eight displays, your work is there. But some customers are transitioning, say, a CAD designer from a desktop to a workstation to allow them greater flexibility,” he said.

Zafarana said the biggest market for workstations is in “companies who are developing things,” whether physical products or intellectual property, with digital media as a strong second market. Other key verticals include software development and financial trading firms.