Microsoft claims great momentum for its Azure cloud offerings. But making it available to partners through open licensing should cause further acceleration. 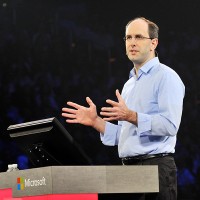 WASHINGTON, DC – Microsoft will make its Azure cloud platform the next product available via Open Licensing, the company announced at its Worldwide Partner Conference here Monday.

Historically, there have been two main ways that customers purchase capacity on Microsoft’s Azure IaaS and PaaS offerings – either directly on the Azure Web site, or as part of a broader Enterprise Agreement with Microsoft. Under the new Open License model, which will go live on August 1, solution providers will be able to buy Azure “credits” in increments of $100 of Azure consumption (be it storage, compute, or specific apps or services), and apply them to customers’ accounts.

“We think Azure in Open is going to open up even more business opportunities for you, and will help monetize the consumption of Azure resources by all your customers,” said Scott Guthrie, executive vice president of Microsoft’s Cloud and Enterprise Group during a Monday morning keynote.

The move to introduce Azure into Open comes two years after Microsoft finally allowed partners more control of Office 365 sales by including it in Open Licensing. At the time, Office 365 was the first Microsoft cloud service to be made available under Open Licensing.

Under the new system, customers will be able to provide the e-mail address of the solution provider they’re working with – or a solution provider can input their own e-mail address if they’re spinning up a customer’s Azure environment – and the partner “remains integrated in the experience as the customer uses Azure more,” including getting updates on how many Azure credits each customer has, and getting alerts – sent to both partner and customer – when the customer’s credit balance for Azure consumption is getting low.

While Azure has been available to partners, the channel does not dominate that particular revenue stream, unlike many Microsoft products and services. John Case, corporate vice president of Microsoft’s Office division, said the channel currently accounts for 35 per cent of Azure revenues, although with greater access to consumption possible through the new Open Licensing option, that number should be poised to grow.

Guthrie’s keynote touted the 300 new features and services added to Azure over the last year, and he said the next 12 months “will be even bigger” in terms of buildout on the platform. He touted Microsoft’s differentiators against rivals Google and Amazon as living at the intersection of enterprise grade and hyperscale, including an advantage in the number of data centre regions the company has worldwide – Azure touts 17 different regional zones, twice the options of Amazon and five times the number Google currently supports.

“Ultimately, we think there’s going to be three large hyperscale providers in the world – Microsoft, Amazon, and Google, and we differentiate with more enterprise-grade support and unique hybrid capabilities,” Guthrie said. “We’re committed to having the best enterprise-grade cloud service out there.”

COO Kevin Turner spoke frequently to partners about getting them to ramp up their customers’ consumption of the cloud services they’re using, and the move to Open should help create partner incentive to do just that.

“The sales cycle doesn’t stop until we get deployment, usage and consumption,” Turner told partners, adding that although it seems basic and obvious, “getting them to deploy and use is the secret sauce in being great at the cloud,” and that partners who deploy quickly and drive up customer consumption of cloud services score the highest in terms of customer satisfaction scores amongst cloud partners.

While Azure is the latest Microsoft cloud offering to become available via Open Licensing, it will not be the last. In his presentation, Case said Microsoft was committed to making its Dynamics CRM Online offering available via Open before the end of fiscal year 2015, which gives it until June 2015 to meet its own deadline.