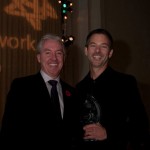 CMS Consulting, Navantis and Non-Linear Creations each walked away from this year’s Microsoft Impact Awards with two trophies.

Those three were among the winners of 28 total awards at Microsoft Canada’s annual gala and awards for top partners, held this week at the historic Capitol Event Theatre in Toronto. Eric Gales, president of Microsoft Canada, told partners that there were a lot of awards, but that “we’re in a lot of categories, and you’ve been doing great stuff in all of them.”

This year’s awards saw a cloud-specific award for the first time, and Gales reflected on Microsoft’s “all in” bet on the cloud, calling it a “new space” for many partners. “We’re learning a ton, and many of you are learning with us,” Gales told partners.

Corinne Sharp, director of the partner channel for Microsoft Canada, noted that the company had the most submissions it has ever had for the awards, for which partners put forth their best solutions in a given category for Microsoft’s consideration.

The 2010 Impact Awards also marked the first time the company has featured a Microsoft’s Choice award, where the company’s employees nominated their own choice. Sharp said that category winner Non-Linear was nominated for the honour by three Microsoft Canada staffers.

ChannelBuzz.ca sat down with Sharp, to discuss the awards, and also caught up with Brian Bourne, president of CMS Consulting before his company’s big two wins, to discuss what impact winning an Impact has for a solution provider.

Other notes from the event:

Here’s a complete list of the winners from the event:

Congratulations to all the nominees and winners from ChannelBuzz.ca!